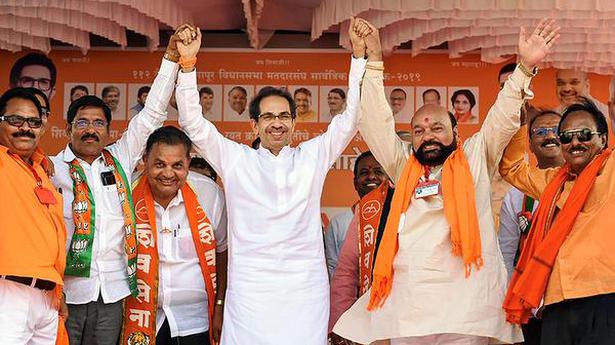 The Assembly polls in Maharashtra are taking place amid a mood of great ennui. The political advantage with the ruling BJP-Shiv Sena, compared to the implosion in the Opposition ranks has led to most analysts concluding that the results wouldn’t change the status quo. That is not the whole story, however.

More interesting perhaps than the ruling party versus Opposition fight, is the internecine warfare between the two alliance partners the BJP and the Shiv Sena and what it portends for the future of politics in the State.

While formally, there is just one seat, Kankavli, where the Shiv Sena has fielded an official candidate Satish Sawant against the BJP’s Nitesh Rane (son of former Chief Minister Narayan Rane), there are at least 30 seats where rebel candidates from the BJP are contesting against the Shiv Sena and vice versa.

For example, Chembur in Mumbai, considered a traditionally BJP seat, has gone to the Shiv Sena in the seat- sharing agreement. Here, Dhananjay Khodkar of the BJP is contesting as an Independent on that seat, unwilling to cede space. In Versova, where the Shiv Sena feels it has a strong claim, the BJP ticket has gone to Dr. Bharati Lavekar of the Shiv Sangram party (an ally in the Mahayuthi). The Shiv Sena’s Rajul Patel, however, is also contesting as an Independent from the seat.

“Most of the rebels are from the Mumbai-Thane-Nashik belt, and much of it has to do with an eye on the next polls, to assert claims on seats based on current performance,” said a senior office-bearer of the BJP.

It is no secret that workers of both parties are upset at the ground ceded during seat- sharing talks, despite Shiv Sena chief Uddhav Thackeray admitting that some sacrifices had been made.

On Thursday in fact, 26 councillors and 300 Shiv Sena workers quit from the Sena citadel of Kalyan-Dombivili, upset at being neglected. Some rebels from the BJP side too have refused to relent and stand down.

Sources in the BJP said in seat adjustment talks, the State unit surprisingly ceded more space than the national leadership wanted to, and missed, in the words of one BJP man, “the opportunity to finish the Sena.” The reasons for this are not hard to find.

The results of the election, the tally of Shiv Sena versus that clocked by the BJP is of utmost importance. That the closer the BJP gets to the half-way mark of 144 seats, the more difficult things would be for the Shiv Sena going ahead is the most obvious conclusion for this tug of war.

The more interesting factor is that a strong BJP in Maharashtra, close to the 144 mark, will also increase interference from Delhi, which can handpick leaders to groom and put forward. A reliance on the Shiv Sena will end up strengthening Chief Minister Devendra Fadnavis’s position, as peacemaker and experienced Mahayuthi hand.

The battle on the ground in Maharashtra is an honest to goodness turf war between long-time allies, to establish, through these polls at least, a lasting hegemony of parties and leaders.

A court here has ordered to attach the property of all six accused in a Muzaffarnagar riots case as they failed to surrender before it despite repeated arrest warrants. The accused had allegedly stabbed a youth, Shahnawaz, to death at Kawal village in Muzaffarnagar on August 27, 2013. The accused have been identified as Ravinder, […]