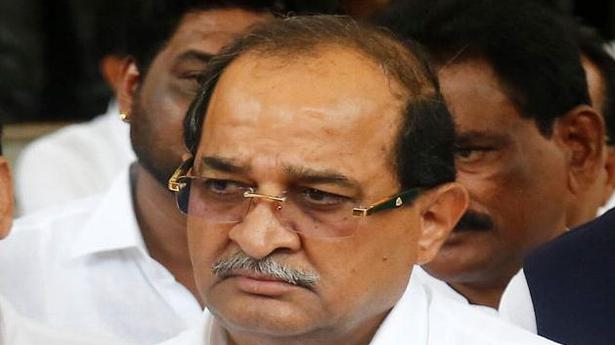 Amid speculations that Maharashtra’s Leader of Opposition Radhakrishna Vikhe Patil may resign from his post after his son Sujay Vikhe Patil joined the BJP, the senior Congress leader told The Hindu on Wednesday that such reports were not true.

In a clarification to The Hindu, Mr. Radhakrishan Vikhe Patil denied that no such decision had been taken by him. “No, it is not true,” Mr. Radhakrishna Vikhe Patil said when asked whether he will submit his resignation today. He didn’t reply on whether the Congress leadership has asked him to resign.

Ever since his son joined the BJP to contest from Ahmednagar Lok Sabha constituency, rumours on Mr. Radhakrishna Vikhe Patil’s resignation were rife.

Asserting that the world has confidence in India and its economy, Union Minister Anurag Thakur on Sunday said the government aims at making India among the top three global economies by 2025. We have become the world’s fifth largest economy and in the next five years, the target is to make India among the top […]

Weeks after Union Minister Maneka Gandhi courted controversy by saying she might not be inclined to work for Muslims who do not vote for her, a Bharatiya Janata Party MLA in Assam has suggested that the government should not take care of Muslims for a similar reason. Prasanta Phukan, who represents the Dibrugarh Assembly constituency, […]

A woman office assistant, attached to a judicial magistrate court at Sankarankovil in Tenkasi district, has tested positive for COVID-19. Resultantly, all those who had come in contact with her have been quarantined and the magistrate has also been tested. Immediately after the woman tested positive on Tuesday, Tirunelveli Principal District Judge A. Nazir Ahamed […]