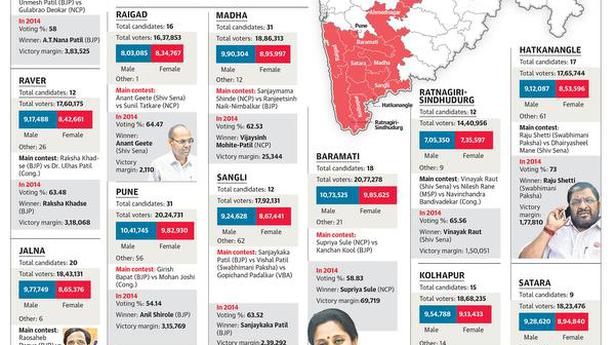 For the third phase campaign, Prime Minister Narendra Modi held two rallies in Maharashtra while Bharatiya Janata Party (BJP) president Amit Shah addressed two rallies. Despite the fact that no candidate from his party is contesting the polls, Maharashtra Navnirman Sena chief Raj Thackeray addressed four rallies appealing to voters to defeat the Shiv Sena-BJP candidates. Congress president Rahul Gandhi, however, did not hold any rally in the State this time.

The phase is set to see interesting battles. Aurangabad — a traditional stronghold of the Sena — is slated for a four-corner fight while BJP leaders are hoping to wrest Baramati and Madha from the NCP.

Group of 70 expects to cover 650 km to MP in a week Source: thehindu.com Related

The Election Commission on Sunday said the decision not to announce the schedule for Assembly polls in Jammu and Kashmir had security reasons. Referring to the recent terror attacks and increased tension between India and Pakistan, Chief Election Commissioner Sunil Arora said the electoral body had been continuously assessing the ground situation in J&K, in […]

Carcasses of animals are floating in stagnant water, people are still seen clamouring for safe drinking water and food from their rooftops and balconies It is the sixth day on Thursday for the residents of waterlogged Rajendra Nagar area in Patna, but there is no let-up in their miseries and woes. The neck-deep stagnant water […]