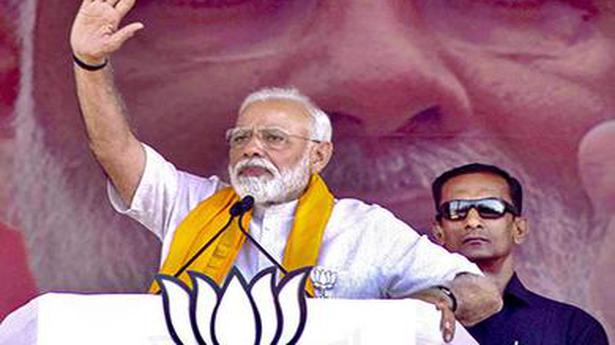 Prime Minister Narendra Modi on Saturday raised the issue of campaign by actors from Bangladesh for Trinamool Congress candidates and hit out at West Bengal Chief Minister Mamata Banerjee, alleging that “she can go to any extent for appeasement politics”.

“People from other countries are being brought to campaign here for appeasement politics. Has this ever happened in the country? For her vote bank and appeasement politics Didi [Ms. Banerjee] can go to any extent,” he said at a public meeting in Buniyadpur, South Dinajpur district of West Bengal.

Videos of actors from Bangladesh, Ferdous Ahmed and Ghazi Abdul Noor, campaigning for Trinamool Congress candidates was aired by certain television channels, which also went viral on the social media. The Election Commission of India and the Ministry of External Affairs took note of these incidents and the actors were asked to return to Bangladesh.

Calling the Chief Minister “speed breaker didi”, Mr. Modi said Ms. Banerjee should stop asking for evidence of the Balakot air stike. Instead, she should look for “proofs” in the chit fund scams and infiltration in Bengal. “Didi, if you really want proof, then look for proofs of the offenders in the chit fund scams and the infiltrators. Stop asking for proofs from our Army,” he said.

Mr. Modi said that like the people of West Bengal, he also misunderstood Ms. Banerjee and was impressed by her simplicity and concern for the State people. “Only after I became Prime Minister, I realised what was happening in Bengal and I had to hung my head in shame.”

Referring to the killing of a BJP worker in State’s Purulia district, Mr. Modi called for stringent punishment for those responsible for the crime. “In Purulia, one more of our activists was killed. I want to assure all our office-bearers, voters and children that justice will be done for the atrocities.”

Two men were killed in a devastating explosion that ripped through a pharmaceutical distribution godown at a commercial complex in Seelamvari Street at Kothapet here in the early hours of Thursday. Kolagani Rama Rao, who is the proprietor of Long Live Pharmaceutical Company, and K. Madhava Rao, a local electrician, were killed in the explosion. […]

35th pilgrimage to Sabarimala for Sivamani

Drummer Sivamani undertook the annual pilgrimage to the Sabarimala Ayyappa temple this year too. He said this was his 35th consecutive pilgrimage. Accompanied by keyboard artist Prakash Ulliyeri, Mr. Sivamani reached the hillock on Wednesday night. Carrying the sacred bundle, Irumudikkettu, on the head, he ascended the Pathinettampady (18 steps) leading to the temple precincts. […]