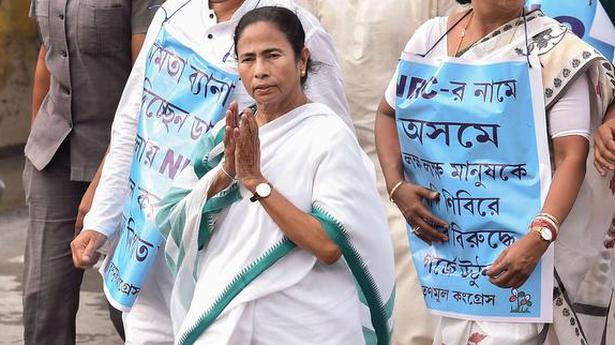 West Bengal Chief Minister Mamata Banerjee on Thursday hit the streets in Kolkata in protest against the National Register of Citizens (NRC) in Assam and said that she won’t allow a similar exercise in West Bengal as long as she is alive.

“I condemn the NRC, I condemn the BJP (Bharatiya Janata Party). We do not accept NRC,” Ms. Banerjee said, addressing a public gathering after leading a 3-km rally in north Kolkata on foot. Ms. Banerjee, along with several leaders, including several Ministers in her Cabinet, walked the 4.6 km stretch from Sinthi More in north Kolkata to Shyambazar.

During her address, the Trinamool Congress (TMC) chairperson said that under no circumstances would she allow the “NRC on grounds of religion, race or caste” and the BJP-led government was playing with fire on the issue of NRC.

Referring to the senior BJP leadership as “comrades in Delhi”, she said, “To the comrades in Delhi, I say that we will not allow any more division of Bengal or India,” she said.

Earlier in the day, State BJP president Dilip Ghosh said that there are at least 2 crore “infiltrators” in Bengal. Responding to the remarks, Ms. Banerjee said, “They are saying they will remove 2 crore people from Bengal. I dare them to touch two persons.”

This is the first occasion on which the TMC chairperson has hit the streets against the NRC. Earlier this month, a resolution was passed in the State Assembly with the support of members of the TMC, the Left Front and the Congress.

Referring to the final list of people who have been excluded from the NRC, Ms. Banerjee said that out of 19 lakh people, 12 lakh were Hindus, including 1 lakh Gorkhas. “Sometimes, protest becomes necessary when the fight is for one’s existence,” she said, alleging, “You won’t be able shut the voice of the people of Bengal as you did with your police in Assam.”

Later in the day, the State BJP president held a press conference saying that Ms. Banerjee would not be able to prevent the exercise of NRC in West Bengal. “Sooner or later, she will have to witness the NRC in Bengal,” he said.

Meanwhile, 12 students and the youth wing of Left parties also brought out a rally from Singur in the State’s Hooghly district. The protesters demanding industrialisation and jobs will reach Howrah on Thursday evening, covering about 33 km. On Friday, they will march to Nabanna, the State Secretariat, located in the Howrah district.

16 of them are reported from Amritsar and Jalandhar districts. Source: thehindu.com Related

Police save the day for ward, grama volunteer candidates

The Kurnool Police extended a helping hand to the aspirants of ward and grama volunteers posts who wrote the written examinations on Sunday. With the rains lashing the district on Saturday night, a majority of the roads were submerged. The police personnel helped to the candidates to reach their examination centres in Pamulapadu and Atmakur […]