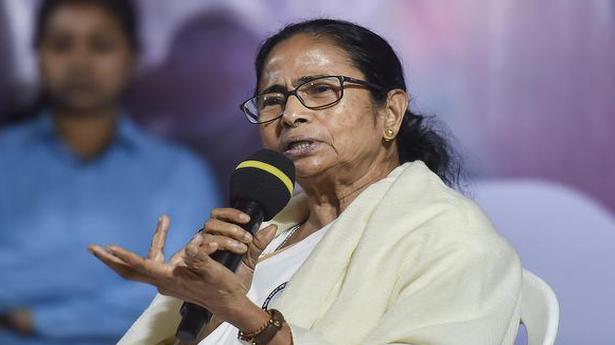 Bharatiya Janata Party (BJP) West Bengal unit president Dilip Ghosh on Sunday said Chief Minister Mamata Banerjee had sent a letter demanding the release of the State’s share of funds instead of attending meetings in Delhi for the purpose, in order to avoid submitting an account of the funds already provided by the Centre.

Stating that the Centre gives the State adequate funds, Mr. Ghosh said funds get returned to the Centre owing to a lack of utilisation by the Trinamool Congress (TMC) government.

“The Centre is ready to give the money, but funds given by it are not utilised and goes back. Let them spend the funds given and submit an account of its utilisation,” Mr. Ghosh, also a Lok Sabha MP, said.

He was replying to queries from presspersons on Ms. Banerjee’s letter to Prime Minister Narendra Modi seeking the release of funds for the State.

Expressing concern over the “steady reduction” of Central funds to the State and the “inordinate delay” in their release, the Chief Minister had said in the letter sent on Thursday that the State is yet to receive its share of Central funds totalling ₹50,000 crore till January 2020.

“The Chief Minister will certainly reiterate the demands when she meets the Prime Minister again,” Mr. Hakim said.

On Mr. Ghosh’s claim that Ms. Banerjee sent the letter to the Prime Minister to avoid submitting an account of the funds used, Mr. Hakim said a government does its work in writing so that it is documented.

When asked whether the ruling Trinamool Congress was in a hurry to hold municipal elections in around 100 civic bodies across the State, the BJP State president said, “What they are attempting to do is to deprive the opposition candidates an opportunity to campaign or get a level playing field in fighting the polls”.

He said the BJP wants the elections to be held as per the rules and asserted that the saffron party would fight the polls with all its might, whenever it is held.

Mr. Hakim said despite being the State’s Municipal Affairs Minister, he himself does not know when the civic body polls would be held.

“How then does Dilip Ghosh know when the polls are to be held? Does he have a spy in the Commission?” he asked.

“The date will be finalised only after the State Election Commission sends its recommendation on it to the government,” Mr. Hakim, who is also the Mayor of Kolkata, said.

Municipal corporations of Kolkata and Howrah are among the 100 odd civic bodies where polls would be held in a few months.

The Supreme Court on October 21 stayed the criminal trial in the alleged sex CD case involving Chhattisgarh Chief Minister and senior Congress leader Bhupesh Baghel as an accused and sought his response on the CBI’s plea to transfer the matter out of the State. A Bench headed by Chief Justice Ranjan Gogoi was told […]

Sunni Waqf Board to seek review of Ayodhya verdict

Expressing its dissatisfaction with the Supreme Court verdict that cleared the way for the construction of a Ram Temple at the disputed site in Ayodhya, the Sunni Waqf Board said on Saturday that it will seek a review of the judgment. The apex court directed the Centre to allot a five-acre plot at an alternative […]

The Supreme Court on Monday asked the Election Commission (EC) to peruse a petition that claimed the “mean act” of cash-for-votes was on the rise in Tamil Nadu. Citing the recent pre-dawn Income Tax raids in the premises of DMK leaders in Vellore district, the petition, filed by K.K. Ramesh who introduced himself as a […]