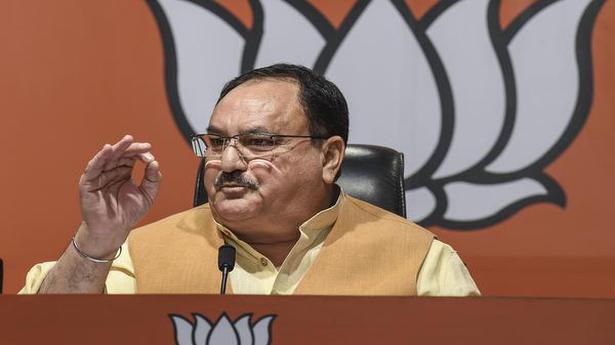 Bharatiya Janata Party (BJP) working president J.P. Nadda on Friday targeted West Bengal Chief Minister Mamata Banerjee for her alleged opposition to abrogation of Article 370 in Jammu and Kashmir and said “the time of her government is over.”

Mr. Nadda asked his party workers to go and ask every person whether the abrogation of Article 370 was necessary or not.

“I want to know from Mamata what sort of politics is this,” he said. And where are they trying to take the country? If the country is there, and it remains strong people will in normal course of things come to power or go out of power,” Mr. Nadda said.

He also criticised Congress leader Rahul Gandhi, saying that Mr. Gandhi’s statements “were used by Pakistan to oppose India in the United Nations.”

Ms. Banerjee had said the process of revocation of Article 370 in Kashmir was done using “undemocratic means” and “under the shadow of the gun.”

She, however, had not said anything to indicate that she was opposed to its abrogation.

The State-level bankers committee (SLBC) will convene a special session to finalise relief measures, including restructuring of loans, once the government notification regarding flood-hit villages is issued, SLBC officials have said. “We will follow the same method that we did last year. But the Revenue Department has to first issue the notification listing flood-affected villages […]

The city is set to host the fifth edition of the Asia Pacific Drosophila Research Conference (APDRC5), which is being organised in the country for the first time by the Indian Institute of Science Education and Research (IISER). This biennial conference, which is to be held between January 6 and 10, aims to promote the […]

Pakistan to remain on ‘greylist’ of terror financing watchdog FATF

However, Islamabad faced several setbacks such as a U.S. report slamming its record on terrorism. Source: thehindu.com Related