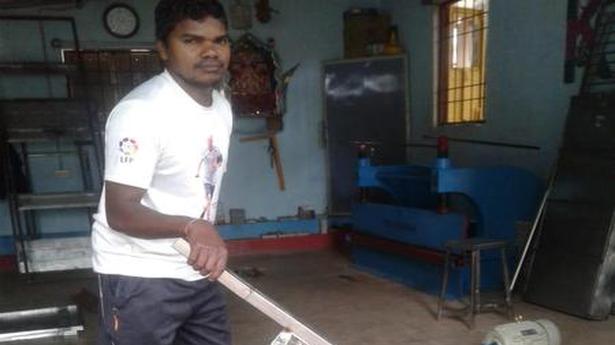 Lack of infrastructure has failed to suppress the scientific temperament of Hari Pangi (39), who develops low-cost appliances for tribal peasants and workers in Odisha’s Koraput district.

Mr. Pangi of Tentuliguda village in Semiliguda block of Koraput district earns his living by collecting and selling medicinal herbs. His knowledge of herbal remedies for common diseases also proves succour for many in his locality. Since long his passion has been to develop simple, innovative devices to ease the work of his tribal brethren.

A low-cost jackfruit cutting machine developed by him has already found acceptance in the jackfruit chips-making project taken up in Koraput district by Odisha Rural Development and Marketing Society (ORMAS) with support of other organisations. According to the Deputy CEO of ORMAS, Roshan Kumar Kartik, forest department and NGOs which are partners in the jackfruit chips project have already placed orders to procure the machine.

Praising Mr Pangi’s innovation, Mr. Kartik said his machine is better and more cost-effective than the devices developed in Kerala for cutting jackfruits. Mr Pangi’s machine is a simple device that can be operated manually and costs around ₹3,000.

Mr. Pangi said he decided to develop the machine after seeing the problems faced by tribal women in cutting large amount of jackfruits to prepare the chips. “I am also thinking of developing a machine to peel jackfruit without getting hands soiled by its sticky sap,” he added.

In the past, Mr. Pangi had developed a mechanical device for easy millet cleaning and processing. He is a grassroots level trainer at Indian Council of Agricultural Research (ICAR).

“I keenly observe the problems faced by people in my area and try to solve them through some simple means,” he said. At present, he is also thinking of developing an indigenous mosquito coil using locally found forest products as the ones sold in market are costly and also cause health problems because of their fumes. He hopes that in future mass production of his mosquito coil will provide income to tribal women of the district. He is also planning to develop a mosquito coil-making machine.

No Chief Minister or political leaders from other States will be part of the Aam Aadmi Party convener Arvind Kejriwal’s oath ceremony at Ramlila Maidan here on February 16, said senior party leader Gopal Rai on Thursday. Mr. Kejriwal will take oath as Chief Minister for a third term in a “Delhi-specific” ceremony, Mr. Rai, […]