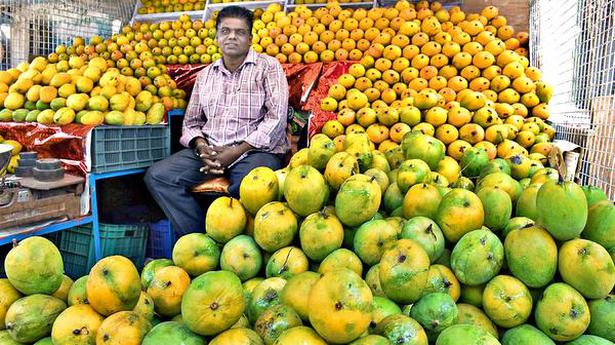 Mangoes have arrived much ahead of their season this time and a variety of them have hit the markets in Mysuru.

One of the reasons cited for this was early flowering and fruiting. This year is an off-year for the crop, according to mango traders here.

Mangoes grown in a radius of around 80 km from Mysuru are being brought daily to the Regulated Market Committee (RMC), which provides marketing facility to growers.

Badami, saindoora, baganpalli, and raspuri are among the varieties that have arrived in the markets. More varieties were expected to arrive at a later stage.

RMC president Pathar Babu, who is also a mango trader, said mango yield would be less this year as it is an off-year for the crop. Continued dry spell and dropping of flowers because of lack of moisture had affected the yield, he said.

Mango growers have been getting a good price for the crop. The wholesale price for varieties such as badami and raspuri was ₹60 to ₹65 a kg and ₹40 to ₹45 a kg, respectively.

The wholesale market for fruits is much organised after it got shifted from Boti Bazaar area in Devaraja Market to the RMC yard at Bamboo Bazaar, Mr. Babu said.

“The market has benefited farmers more than traders as it has given a platform for them to sell their produce at competitive rates besides getting facilities,” he added. Fruit market was shifted to RMC yard about four years ago. Traders from Kerala and Tamil Nadu visit the market daily to buy the produce from the traders as well as farmers.

Kannur-Virajpet route can be considered: Karnataka

The Karnataka government on Tuesday submitted before the Kerala High Court that it could consider the demand of the Kerala government that the Kannur-Iritty- Koottupuzha-Mangoor- Virajpet route be opened for transportation of essential commodities if an appropriate letter was sent by the authorities in Kerala to the Karnataka Home Department. Karnataka Advocate General P.K. Navadgi […]

Police in Noida get meal from ‘Namo Food’, SSP says not from political party

Some policemen on election duty in Noida were served meals in packets labelled “Namo Foods”, following which officials clarified that those were procured from one “Namo Food Shop” and not from any political party. The food packets, brought in the boot of a hatchback car, were distributed around 9.30 a.m. among personnel deployed in Sector […]