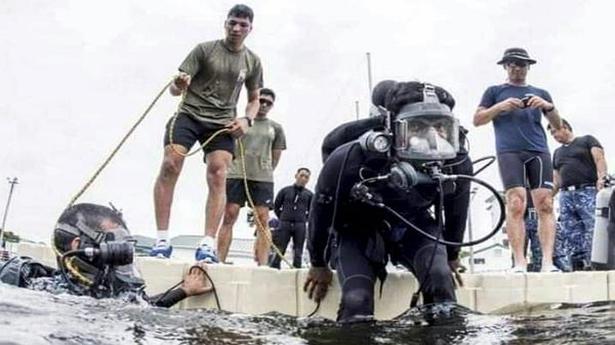 After five days of search operation, a combined team of Indian Navy, NDRF, SDRF, firefighters and local volunteers recovered one body from the Eco Park lake at Chandong in Ukhrul district where a boat with 12 tourists capsized on April 28.

Two brothers, Rajiv and Romen, and their cousin, Rani, went missing when a sudden storm turned the boat in the middle of the lake. Nine other passengers on the boat managed to swim to the shores.

Police personnel deployed around the lake to maintain law and order said that the body was identified as that of Rajiv. Members of the combined search team took the body to Ningthoukhong township at some distance from the lake.

Search for Romen and Rani continued till 6 p.m. on Thursday. One NDRF official said the search will resume on Friday morning.

Water Resources Minister Letpao Haokip said, “Though we are not directly involved in the rescue operations, senior officials are camping here. On Wednesday, the water level of the lake was reduced by 7.5 metres. On Thursday it was reduced further. We are doing it to facilitate the search.”

Local villagers said it is not surprising that the search operation is still continuing. “The construction of the Maphou dam was started in 1980 with a view to provide irrigational and drinking water in some valley districts. Most of the private houses and one school building were submerged in the dam water. A church at the top of a mountain was the last building which went under water. It is possible that the bodies are trapped in one of the buildings or tree branches.”

House arrests signal that govt will defy all democratic norms in J&K: Chidambaram

Senior Congress leader and former home minister P. Chidambaram on Monday condemned the “house arrest” of leaders in Jammu and Kashmir and claimed it was a signal that the government would defy all democratic norms to achieve its objectives. Kashmir remained on edge as authorities stepped up security at vital installations and in sensitive areas, […]