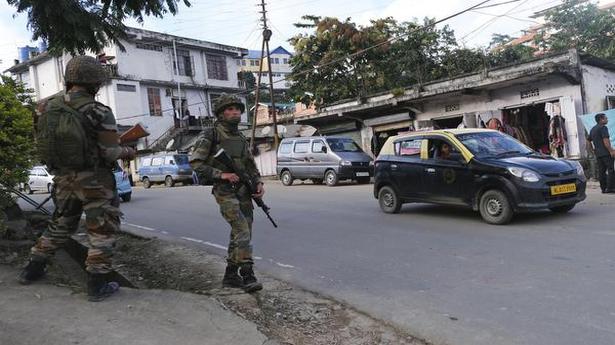 An umbrella organisation of non-governmental organisations in Manipur has announced a 20-hour protest on October 31, the “deadline” for arriving at a solution to the protracted Naga political problem.

The Coordination Committee on Manipur Integrity (COCOMI) has asked the people, irrespective of their religion and ethnicity, to suspend all normal activities on Thursday for protesting against a peace deal that could “challenge” the State’s territorial integrity.

“The call to people is for building up a civil uprising and a collective resolution to determine our own future in case the final Naga agreement challenges Manipur’s territorial integrity, economy, cultural practices and administrative set-up,” COCOMI coordinator Sunil Karam said.

The protest, expected to shut down at least five districts straddling the Imphal Valley, is scheduled from 4 a.m. to midnight.

Manipur, along with Arunachal Pradesh and Assam, fears losing large swathes of land if the Centre is working towards an “inclusive settlement” covering all Naga-inhabited areas of the northeast.

The apprehension stems from speculation that the Centre and the Isak-Muivah faction of the National Socialist Council of Nagaland (NSCN-IM) reached an agreement that would lead to the redrawing of boundaries of the States with a sizeable Naga population.

Nagaland and Manipur are also abuzz about the Centre, determined to conclude the peace talks by October 31, cold-shouldering the NSCN-IM and going for a settlement with a caucus of rival outfits called the Naga National Political Groups (NNPGs).

Nagaland Governor R.N. Ravi, also the interlocutor in the Naga talks was quoted by local dailies as saying: “The October 31 deadline will be met under any circumstances as promised earlier by Prime Minister Narendra Modi.”

He also told the local media that the deadline has been made clear to the NSCN-IM delegation, led by its general secretary Thuingaleng Muivah, during a meeting in New Delhi on Monday.

The peace talks hit a roadblock after the NSCN-IM remained firm on its demands for a separate ‘Naga national flag’ and ‘Naga yezhabo’ (constitution), which it claimed was committed to in the Framework Agreement it had signed with the Centre on August 3, 2015.

The NNPGs have insisted on the settlement first. “We are not against a separate flag and constitution, but these can be worked out later,” a leader of the caucus said.

Three Lambada tribal youth drowned while they were taking a bath after Ganesh immersion in a local pond at A. Konduru thanda in A. Konduru mandal in Krishna district on Saturday midnight. According to Nuzvid Deputy Superintendent of Police B. Srinivasulu, the deceased have been identified as Banavathu Gopala Rao, 18, Bukhya Shankar, 21 and […]

Devotees can soon experience the thrill of being inside the famous hill temple of Lord Venkateswara if the efforts of the Tirumala Tirupati Devasthanams (TTD) to set up a “temple experience gallery” at its Sri Venkateswara Museum is any indication. The TTD has decided to set up an exclusive gallery, wherein devotees can have an […]

The BJP received ₹356 crore in donations from an electoral trust controlled by the Tata Group during 2018-19, according to documents submitted by the ruling party before the Election Commission. As per information provided by the BJP to the EC on October 31, it received a total of over ₹700 crore in donations through cheques […]