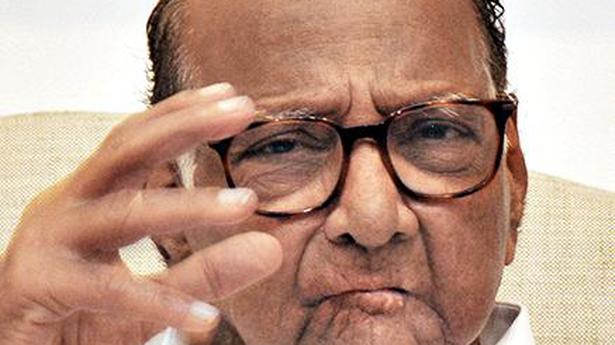 He also urged him to allow the family and those who respected late Parrikar, to grieve in peace.

Sharing copies of his signed letter with The Hindu, Utpal said on Monday that the family was particularly saddened and dismayed by the remarks.

“I am shocked, saddened and dismayed as Mr. Pawar, such a senior and seasoned leader and who was himself a Defence Minister should speak like this, particularly when he knows that my father is not around to reply to his statement,” said Utpal.

“Even when my father was alive, and courageously fighting his illness, certain political leaders dragged his name for petty politics. That time my father had given a fitting reply to such insuniations and innuendo.”

“Today he is not amongst us that is why perhaps you are taking the liberty to use his name and speak lies.

“Being a senior and respected politician, people of India did not expect such a statement from you Pawar sahib,” he said.

Stating that his father was an honest, upright individual who worked in the best interests of the country, he said that his father went on to serve as Defence Minister and by all accounts did an excellent job. Stating that many historic decisions were taken by him, for which he will be forever remembered, Utpal said that one of those was the Rafale fighter aircraft acquisition deal of which he was one of the chief architects.

He said that later when the people of Goa wanted him to come back to serve them, Parrikar came back and served Goa till his last breath.

“It is an insult to the love between people of Goa and late Parrikar to falsely suggest that he came back due to Rafale acquisition. As a former Defence Minister yourself, I am sure you know the importance of equipping our brave soldiers well.”

Utpal, who is a front-runner to contest from the Panaji Assembly seat presently lying vacant due to his father’s demise, also said that Mr. Pawar’s comments were part of a “malicious misinformation campaign that seems to hinder the strengthening of our armed forces”.

Social media cringed collectively on Tuesday at Anna Linda Eden’s Facebook post, in which she shared videos of husband and Ernakulam MP Hibi Eden and their flooded home with a caption that said, “Fate is like rape, if it cannot be resisted, it must be enjoyed.” When the post came under attack from various quarters […]

Sankranti festivities reached a feverish peak in the town as a two-day kite festival kicked off at the Lakaram tank bund here on Monday amid an exhilarating atmosphere. A variety of colourful kites in diverse shapes and sizes dotted the city’s skies as curious onlookers watched the visual spectacle on Monday evening. Kites in varied […]

Screening of docu cancelled over threats

The screening of a Malayalam documentary on a tea shop owner’s novel protest against demonetisation, scheduled to happen at the Kerala Club in Delhi on Monday evening was cancelled over alleged threats from right wing activists. Sanu Kummil’s documentary Oru Chaayakkadakkarante Mann ki Baat chronicles the life story of 75-year-old Yahiya, who shaved half his […]