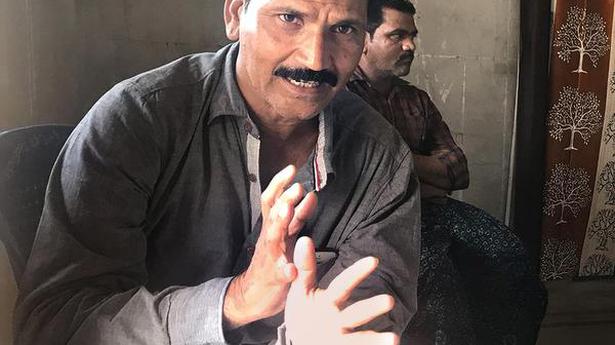 During the last two decades since he left the interior confines of the erstwhile Adilabad district, former top Maoist Oggu Satwaji alias Sudhakar finds forest to be in a pathetic state. He is of the opinion that the absence of Maoists in Telangana, and especially in Adilabad, is one of the major causes for forest destruction.

Mr. Satwaji, who had gone underground as early as 1984, led the naxalite campaign with regard to their forest policy and Adivasi land issues in Adilabad during the second half of 1990s and later in the States of Chhattisgarh, Odisha and Jharkhand until he laid down arms in February this year. Hailing from Sarangapur mandal headquarter in Nirmal district, he operated in many capacities in the underground outfit, including as member of the Central Committee looking after the organisation’s affairs in Bihar and Jharkhand.

In an interview with The Hindu, the top naxal leader spoke on Maoist activities in controlling unmindful felling of forests in central India — Bihar and Jharkhand — where he looked after the activities of his party. He also recalled the efforts of extremists, then under the banner of CPI (ML) People’s War (PW) in resolving land issues and protecting forests in what was then unified Adilabad district. “No felling of forests or opening of mines took place wherever our presence was strong in Odisha, Chhattisgarh or Jharkhand. The party strongly feels that resources need to be protected for future generations,” he observed of the line that the Maoists have taken in barring companies from unmindful destruction of forests and environment.

“It is due to the awareness created by the party in the need for forest protection that the poor tribals in central India are strongly opposing moves by corporates to destroy forests in the name of development. There is a lot of debate on the issue within the party on the subject,” the former naxalite revealed.

With regard to controlled forest felling and land issues in former composite Adilabad district, Mr. Satwaji recalled the activities of extremists in the mandals of Boath, Indervelli, Tiryani, Bazarhatnoor and in Mangi area between 1997 and 2000 when he was PW Adilabad District Committee secretary. “We allowed cutting of trees to the extent required only and allotted such land to tribals and poor non-tribal families, gave them seed, chemicals and even cattle wherever required so that they can eke out a living,” he remembered. The party even issued pattas on the lands allocated to individual farmer carrying his photograph. The task was handled by grama rajya committees formed by naxalites in many villages during that period. On the relevance of the Maoist stand on environment protection, the top former leader, who was also a member of the deadly Central Military Committee of the party in the past, said there is nothing wrong in government taking note of it if it helps the poor society. “You evaluate whether there is substance in it,” he suggested as he talked of the increased severity of land issues in the district.

The suspense over Congress MLA and former Home Minister P. Sabita Reddy joining TRS was broken on Wednesday after her nearly two-hour meeting with Chief Minister K. Chandrasekhar Rao at his camp office. After the meeting, Ms. Reddy’s son Karthik Reddy who was among the three siblings to accompany their mother told the media that […]

From April 1, Aadhaar must for welfare pension in Odisha

The Odisha government has announced that from April 1 only beneficiaries with Aadhaar card will be given pension under the National Social Assistance Programme (NSAP) and the Madhubabu Pension Yojana (MBPY). The warning came after Aadhaar seeding of all beneficiaries under the NSAP and the MBPY could not be completed by October last year. Aadhaar […]