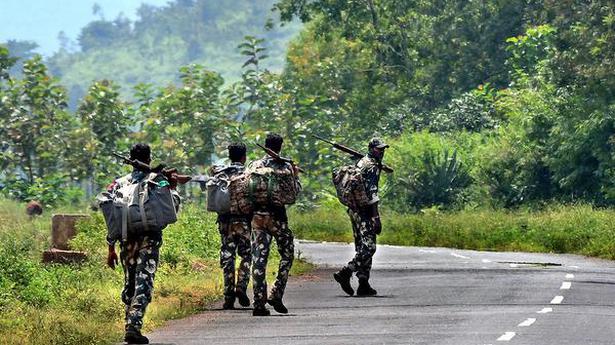 The banned CPI (Maoist) appears to be losing vital ground in the vulnerable Agency area of Visakhapatnam district, with tribals voting in large numbers in the April 11 elections despite a boycott call issued by the ultras.

Polling in the Araku region stood at over 70%, while in Paderu it was over 66%. Tribals from interior pockets where Maoists are known to hold sway, such as Killamkota, Darakonda, Jerella, Puttukota, Busuputtu, Injari, Annavaram and Balapam, had also turned up in large numbers to cast their vote.

“This is an indication that the Maoists are losing their grip and that the tribals are defying their diktat,” said a senior officer from the State Intelligence Bureau.

A close reading of the situation points to a few possible reasons for the decline of the Maoists’ influence in the region. A major factor is the prolonged absence of Maoist Central Committee member Akkiraju Haragopal alias R.K. from the Andhra-Odisha Border (AOB) region, say senior police officers.

R.K. is believed to be in poor health, needing assistance to walk. He was reportedly shifted out of the AOB region a few months before the elections and was reportedly brought back around a month ago, but it was too late for the ultras to have any serious impact on the elections.

According to another officer engaged in anti-Maoist operations in AOB region, R.K. is a highly-regarded figure in the area and commands respect among tribals. “He is not only a top strategist, but is well-connected to the tribals, and knows the terrain of the Agency like the back of his hand. He is accepted by the tribals, despite being a non-tribal, unlike younger leaders such as Gajarla Ravi alias Uday and Aruna,” the officer said.

Another major contributing factor to the decline in the influence of the Maoists is the absence of senior tribal leaders.

Tribal leaders who held sway over the Girijans, such as Kudumula Venkata Ramana alias Ravi, was a State-level secretary who died of jaundice in April 2016. This was followed by the killing of Bakuri Venkata Ramana alias Ganesh in the Ramaguda encounter in October 2016, and Gemmeli Narayan Rao alias Jambri, in another exhange of fire in February 2017.

The present leaders overseeing the operations, such as Uday, Chalapathi and Aruna, are all non-tribal leaders and their acceptance is low. They prefer using force over ideology to exert influence over the tribals, which is leading to disillusionment, said Attada Babujee, Superintendent of Police, Visakhapatnam.

“The Maoists were of the opinion that a major strike after the Ramaguda encounter, in which over 30 Maoists were killed in October 2016, would revive their movement. It was this line of thinking that led to the murders of Araku MLA Kidari Sarveswara Rao and former MLA Siveri Soma in September 2018. However, it did not give them the desired mileage,” said another officer from the SIB.

“Tribals are desirous of development and are openly protesting the destruction of mobile phone towers by the Maoists. The obstructions being caused by Maoists in road construction is also drawing the ire of tribals. Moreover, the basic ideological movement has lost its relevance,” Mr. Babujee said.

One more case of false COVID-19 positive has been reported in Chikkamagaluru. A pregnant woman of Tarikere, who tested positive on May 19, has been di Source: thehindu.com Related

Maradu demolition: SC judge criticises residents for pitting order of one Bench against another

Supreme Court judge Justice Arun Mishra on Friday launched a stinging criticism against residents of illegal Maradu flats in Ernakulam, Kerala, for approaching another apex court Bench to get a stay of the demolition of their apartments on the sly. On May 8, a Vacation Bench led by Justice Mishra ordered the flats, numbering over […]