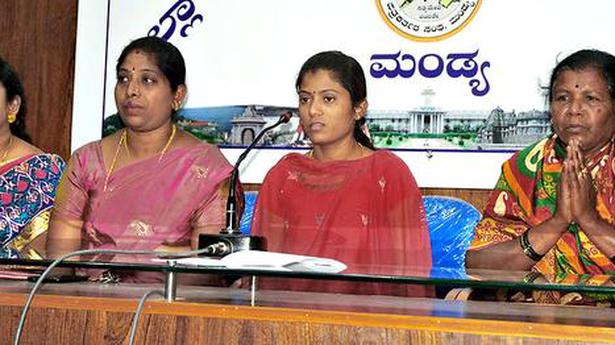 According to reports in some sections of the media, the family had received donation/compensation amount of ₹12 crore to ₹15 crore after the death of Mr. Guru. The soldier, a native of Gudigere Colony near Kala Muddana Doddi near Maddur, was killed in a terror attack at Pulwama in Kashmir on February 14.

The media reports also stated that differences had developed between Mr. Guru’s mother Chikkolamma and wife Kalavathi over sharing the amount. It was also said that Ms. Chikkolamma wanted her daughter-in-law to get married to her younger son H. Anand.

Both the women, along with some Janata Dal (Secular) workers, addressed mediapersons here and said that there is no dispute between them. “Some mediapersons misquoted us and we have not approached the police,” Ms. Kalavathi said.

Ms. Kalavathi also said that she would decide the future course of action [of continuing education and joining the State government-offered job] after meeting Chief Minister H.D. Kumaraswamy in Bengaluru on Friday.

All districts except Bengaluru Rural see decline in active cases in Oct.

Active cases in the State have seen a negative growth in all districts except in Bengaluru Rural where there has been an increase of over 65% in October. In the 28-day period from October 3 to October 31, while 29 districts saw a negative Moving Growth Rate (MGR), this rate has shot up by 65% […]

A.P. government to give energy conservation awards for best efforts in industrial, residential and municipal sectors

Shamnad Basheer may have died of suffocation: Police

A day after legal scholar Shamnad Basheer was found dead in his car in Karnataka, police on Friday said he may have died due to suffocation, discounting the possibility of any foul play. Basheer, an alumnus of the National Law School of India University here and the Oxford University, was found dead by police in […]