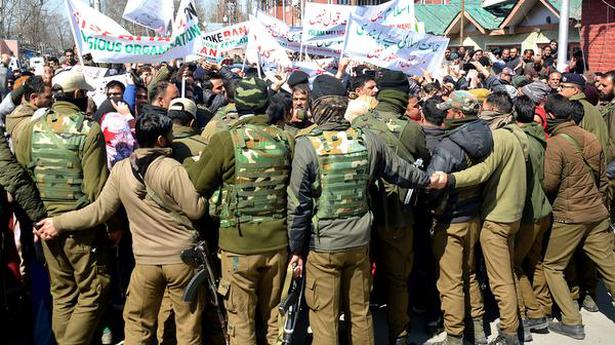 “Arresting JeI’s members and the preachers affiliated with Ahli-Hadith is a direct interference in our religious affairs. We won’t tolerate this,” said Ms. Mufti.

“What are the charges against these leaders. They have arrested 60 and 70 years old people without any solid proof,” she added.

Ms. Mufti led the protest rally in her home consistency of Anantnag district in south Kashmir, which is considered the bastion of the banned JeI. She demanded immediate revocation of the ban on JeI, saying “Such tactics won’t help in establishing peace in J&K”.

Over 300 JeI members had been rounded up after the JeI was banned for five years under the Unlawful Activities (Prevention) Act on February 28 in a decision moved by the Union Home department.

Ms. Mufti, who was desperate to reclaim the lost constituency in south Kashmir after her party joined hands with the BJP to rule J&K for four years, asked the Centre “to stop state-sponsored terrorism” and “autocratic approach”.

“The BJP is trying to crush everyone that comes in its way. My party’s alliance with the BJP tightened noose around it. After breaking away from the PDP-led coalition, the BJP has turned into an un-controlled elephant,” she said.

The PDP is planning to protest at district and constituency levels “unless the arrested Jammat leaders were released”.

The top court had made it clear that fate of the project, which includes several new government buildings and a new Parliament House, would depend on its decision. Source: thehindu.com Related