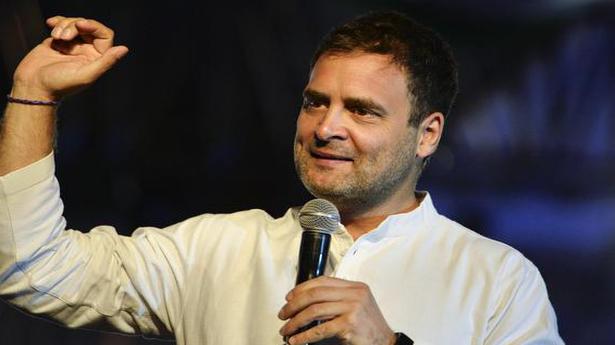 The Congress would deliver on its ambitious Nyuntam Aay Yojana (NYAY) scheme without burdening the middle class or raising taxes, said party president Rahul Gandhi on Friday, remarking that if the UPA came to power in 2019, it would fund NYAY through money retrieved from economic offenders and crony capitalists.

In a packed interaction with students across Pune’s colleges and varsities, Mr. Gandhi said that the Narendra Modi-led BJP government had written off a whopping ₹3,50,000 crore in loans to the 15 richest business people in this country.

“How many students here have had their education loans written off? Why is it that if your name is Anil Ambani or Nirav Modi your loans are forgiven whereas if you are a student or farmer, you can’t have your loans written off,” he said, adding that there was no shortage of money in this system and that it would come from the people who had dominated the banking system so far.

Over 4000 students congregated at Pune’s Mahalaxmi lawns In Hadapsar for a freewheeling interactive session with the Congress president. The event was moderated by RJ Malishka and actor Subodh Bhave.

Mr. Gandhi answered questions on a range of issues, from the personal to the political on the occasion.

Commenting on the Congress’ manifesto for the upcoming general election, he said that it was not an expression of the Congress party, but of the people of India.

“The manifesto that we put out is not really ours… We have gone to students, farmers, doctors, lawyers all stakeholders and asked them. The idea for the NYAY scheme idea hasn’t come from us (the Congress). It has come from the Indian people,” Mr. Gandhi said.

Answering a question on the Modi government’s demonetisation move, he said it was “a disastrous idea”.

“You can ask any economist about it… It had a terrible effect on the economy. Millions of jobs were lost, 2% of the GDP was lost. It is like an injury we have sustained and have no choice but to live with it.”

Responding to questions on unemployment and underemployment, the Congress president observed that 27,000 jobs were being lost every 24 hours in India while China is producing 50,000 jobs in the same time span.

“The reason for this is that in India, we do not respect skill or the capability of a person,” he said, remarking that it was imperative to respect skill and target it with financial and political support.

In this vein, he spoke on the flaws of the Indian university system, commenting that it was insular as varsities were not linked to jobs.

On education and healthcare

Remarking that there were 22 lakh government posts lying vacant, he said that India needed to build a solid education and health infrastructure along with effective public institutions.

“There is a logic prevalent in this government that privatization will solve the problems in healthcare and education sectors. The Government has a responsibility to show the private sector that it can create quality institutions. Instead there have been dramatic cuts in education,” Mr. Gandhi said.

He promised that a UPA government, if it came to power, would increase its expenditure on education on education, raising it to 6 per cent of the total GDP.

Speaking on the need to kick-start the economy, Mr. Gandhi talked of the merits of the NYAY scheme, stating that putting ₹72,000 in the bank accounts of the poor would give the economy a much-needed boost.

On reservation for women

Commenting that the Planning Commission was a strategic institution, he said that India needed an institution that thought strategically at the global and not the local level like the NITI Ayog.

“NITI thinks only about tactics and not about strategy. The nature of the institution needs to be changed. India needs two or three strategic moves right now if we have to compete with China,” he said.

Extending the analogy of the Indian educational systems where questions were not welcome, Mr. Gandhi subtly targeted Mr. Modi’s authoritarian style of functioning.

“I am standing here and answering questions that I may not like or make me feel uncomfortable. Why does the Prime Minister not welcome such types of open, interactive functions?” he said, stating that the PM’s alleged lack of transparency derived from “an attitude that only he knew everything and no one knew anything.”

When asked as to who should take credit for the airstrikes on the JeM camp at Balakot in Pakistan, Mr. Gandhi said that the Indian Airforce deserved full credit for it.

“It is important that people know that they cannot mess around with India. While I am for the airstrikes, I am against its politicisation,” Mr. Gandhi said.

In yet another potshot directed at Mr. Modi, he said: “I feel uncomfortable when the Prime Minister politicises the strikes. I don’t do it, he does it but that’s his choice.”

He also acquiesced to a question on whether there ought to be a retirement age for politicians, stating that “60 is a very good for politicos to retire.”

India and Pakistan have never been friends, but the war they fought in 1965 actually ended up benefiting the hundreds of thousands of people who commute daily between Kolkata and Howrah, the two neighbouring settlements separated by the River Hooghly. Load off bridge Until 1965, West Bengal and Assam were connected by waterways, and vessels […]

Reiterating her opposition to the Citizenship (Amendment) Bill on the day it was tabled in the Lok Sabha, West Bengal Chief Minister Mamata Banerjee on Monday termed it as the same as the National Register of Citizens (NRC). She said not a single citizen should be forced to leave the country. “No NRC, no divide […]