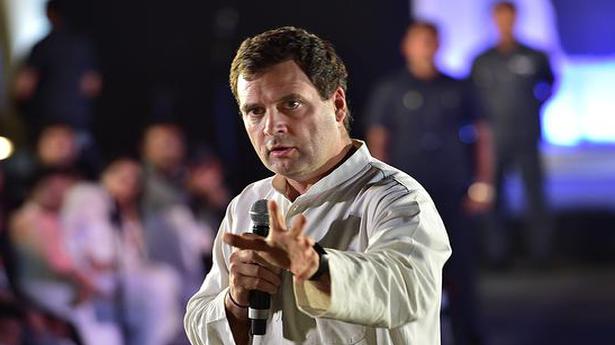 Congress president Rahul Gandhi on Tuesday termed his party’s promise of minimum guaranteed income to the poorest 20% households a “surgical strike on poverty” and said nobody should be poor in 21st century India.

Addressing a rally in Suratgarh town of Ganganagar district, a day after declaring his party would roll out the scheme if voted to power, Mr. Gandhi alleged that Prime Minster Narendra Modi gave money to the rich and top industrialists of the country and said the Congress would serve the poor.

He said the promised minimum income scheme was a “big bang”.

“Dhamaka hai ye…bomb fatega (It’s a big bang…a bomb will set off). This is a Congress’s surgical strike on poverty. They (the BJP) worked to eliminate the poor, we will eliminate poverty,” Gandhi said.

He alleged that poverty and unemployment increased under the Modi government. While the Congress-led UPA government lifted 14 crore people out of poverty, “Modi made them poor again”, he claimed.

On Monday, Mr. Gandhi announced in New Delhi that ₹72,000 per year will be given as minimum income to poor families, benefiting around 25 crore people, if his party is voted to power in Lok Sabha polls.

“Nobody should be poor in the country in 21st century,” he told the Suratgarh rally on Tuesday.

He also alleged that the Modi government weakened the schemes and programmes such as MGNREGA and food security introduced by the UPA dispensation.

“Whatever was done under the MGRENGA, food security and loan waiver by the UPA government, that all were finished by Narendra Modi. Poverty and unemployment increased in his rule,” he said.

He said that top industrialists were helped by the government in “looting” the public money and their debt of ₹3.5 lakh were written off, but farm loans were not.

The Congress chief continued his “chowkidar” barb at the PM.

“During last elections, he promised jobs to two crore youths, ₹15 lakh in every bank account. But no jobs were given and no money was transferred. He made tall promises. He spoke whatever came to his mind. He had asked public to not make him the prime minister but a chowkidar (watchman). But he never told that he will not be your chowkidar but a chowkidar of people like Anil Ambani,” he said.

Mr. Gandhi said that all those who took away public money from banks were “helped” by the NDA government, PM Modi, BJP chief Amit Shah and Union minister Arun Jaitley. All of them have looted public money, he charged.

He also targeted the government over demonetisation and GST and asked if the note ban was announced to curb black money why nobody having such asset was seen in queue to covert the currency.

Banks changed the black money through the back door, he alleged.

All these allegations have been refuted by the BJP and its leaders.

The Congress president reiterated his allegation on the government over the Rafale deal, saying Mr. Modi helped Anil Ambani in getting the contract for manufacturing the plane despite the fact that he had no experience in making aircraft.

These allegations have also been rejected by the government and Mr. Ambani.

Ahead of vote for UNSC seat, India launches campaign brochure

This will be the eighth time India will occupy a non-permanent UNSC seat, with its last stint in 2011-2012. Source: thehindu.com Related

Five Indians were among the 50 people killed by a gunman who opened fire on worshippers at two mosques in Christchurch, in the worst attack on Muslims in New Zealand, the Indian High Commission said on Sunday. The attacker, identified by authorities as Australia-born Brenton Tarrant, 28, reportedly targeted immigrants during Friday prayers. Witnesses said […]