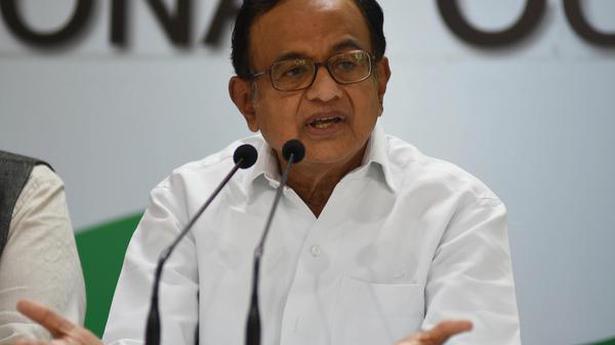 The Congress party’s minimum income guarantee scheme will be rolled out in phases, senior leader P. Chidambaram said on Wednesday. The five crore beneficiary families will be covered in phases, he added.

Addressing a press conference here, the former Finance Minister said enough economists and experts in the subject have been consulted and they broadly agreed that India has capacity to implement the scheme.

Mr. Chidambaram said former RBI Governor Raghuram Rajan was of the view that the implementation of the scheme is possible.

He said the allocation for the scheme is expected to constitute 1.8% of the GDP. “Our calculation shows that it will not cross 2% of the GDP, it will be 1.8% of the GDP at any given point of time,” he said.

“The scheme will be rolled out in phases and we will cover the five crore families in phases,” he added.

The senior party leader said the scheme has to be tested in the field before being rolled out.

An expert committee will be set up for the implementation of the scheme and it will design it at every stage and “we will consult the committee before we move to next stage,” he said.

There is enough data to identify the five crore families, Mr. Chidambaram added.

When the 100 days employment scheme (Mahatma Gandhi National Rural Employment Guarantee Act) was implemented in 2009, BJP leader Arun Jaitley had said it was not possible to implement the scheme.

Mr. Jaitley, however, forgot to say that doubling income for the farmers was not possible when Mr. Modi announced it, said Mr. Chidambaram.

“I don’t wish to reply to anyone who criticises a programme intended to wipe out poverty,” he said answering a question on criticism of the scheme. “MNREGA eradicated hunger, income scheme will root out poverty.”

The Congress alone cannot be blamed for not eradicating poverty, he said, adding that party had taken several measures to root it out and succeeded in several of them as well.

“To eradicate poverty, a minimum income is needed, otherwise poverty will not end.”

Like the Minimum Wages Act which stipulates minimum wages, every family should have a minimum income and the government cannot provide the entire income and that was why the scheme is called the “Minimum Income Support Scheme.”

An amount of ₹72,000 a year — a standard amount ₹6,000 per month — is proposed to be transferred to the account of beneficiaries if the Congress is voted to power in the coming Lok Sabha elections.

He said his party was aware of the challenges involved in implementing the scheme and added, “We will overcome these challenges.”

“We will insist that every family should open an account in the name of the woman in the family and the money will be transferred to her account.”

Poverty eradication should be accepted as an “aram (meaning dharma in Tamil), it is dharma, it is a moral duty of every government in the 21st century,” he said.

To a question, he said, ”Don’t compare Kisan Samman Scheme with this scheme and trivialise our scheme,” he said and alleged the BJP had rolled out the farmers plan “for elections.”

Had the scheme been important for the BJP-led NDA, Mr. Chidambaram asked why it did not implement it in “full five budgets,” and rolled it out at the fag end of its tenure.

He indicated that the Congress manifesto is likely to be released on April 2.

On March 25, Congress chief Rahul Gandhi Monday said 20% families in poorest of the poor category will be given ₹72,000 each annually as a minimum income.

Mr. Gandhi had touted the promise as a “groundbreaking” measure to end poverty.

The Congress president had said, “The time for change has come”.

Five crore families and 25 crore people will directly benefit from the scheme, he claimed, terming it as a “final assault” to eradicate poverty in the country.

He had allegedly raped woman on collectorate premises after threatening to remove her husband from service Source: thehindu.com Related

U.S. urges easing of restrictions and political engagement in Kashmir

The U.S. government has expressed continuing concern over the situation in Kashmir following India’s abrogation of Article 370 on August 5, a move which stripped the State’s special status, and the ensuing restrictions in place in the region. “We continue to be very concerned by widespread detentions, including of local political and business leaders, and […]

Historic temple to get a facelift

The historic Mallikarjuna Swamy temple at Inavolu village is at last witnessing some development, a demand long pending. The temple, popularly known as Inolu Mallanna temple, has a history of over 1,100 years according to local legend. About 25 lakh people visit this temple from Sankranti to Ugadi festival. Here the Jatara lasts about three […]