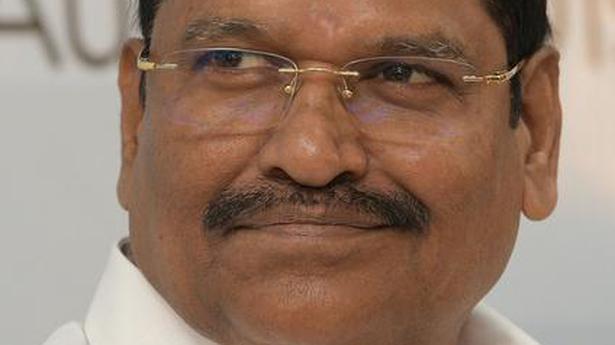 According to an official release, crops cultivated on over 45,000 hectares were submerged

The Tamil Nadu government has taken steps on a war footing to bail out water from inundated areas in Cuddalore district and the extent of crop loss would be known only after water is drained, Industries Minister M.C. Sampath said on Sunday.

The Minister, accompanied by Principal Secretary to Government Gagandeep Singh Bedi and Collector Chandra Sekhar Sakhamuri, inspected rain affected areas in Kizhpoovanikuppam, Alapakkam and Sirupalayur in Kurunjipadi. They also inspected the Perumal Eri and rainwater overflowing on the Cuddalore-Chidambaram Road at Alapakkam.

According to an official release, crops cultivated on over 45,000 hectares were submerged. About 210 livestock were killed while 1,951 houses were damaged in the rains. Meanwhile, the district administration has organised medical camps in all the 13 blocks in Cuddalore district following the heavy rainfall and subsequent flooding.

‘Steps being taken for their quarantine and period after that’ Source: thehindu.com Related

With the diversification of their operations, the cooperative societies in Rajasthan have started creating a buffer stock of chemical fertilizers for rabi crops this year. The Rajasthan State Cooperative Marketing Federation (RAJFED) has also launched new measures for agricultural subsidy and formation of self-help groups. Naresh Pal Gangwar, Principal Secretary, Cooperative Department, said here on […]

Punjab Chief Minister Amarinder Singh’s wife Preneet Kaur lost ₹23 lakh to a scamster who duped her through a mobile phone call, posing as a bank manager, said the police. Also a Congress MP from Patiala, Ms. Kaur was duped a few days ago, said the police on Wednesday, adding that the scamster had been […]