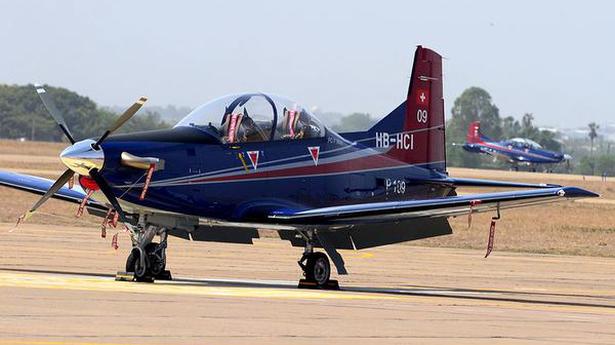 The Ministry of Defence (MoD) has partially revoked suspension against business dealings with Pilatus Aircraft Ltd of Switzerland following representation from the Indian Air Force (IAF) as its fleet of PC-7 Basic Trainer Aircraft (BTA) was deprived of spares and maintenance.

“The service headquarters concerned requested for review of the order for sustaining of flying training on PC-7 MK-II BTA. In view of the fact that the IAF needs spares and maintenance support for 75 BTA already in use and appreciating its dependence on Pilatus Aircraft Ltd. for spares and maintenance for 75 BTA, it has been decided to review the suspension order…” an MoD note dated October 7 said.

In July this year, the MoD suspended all business dealings with Pilatus over allegations of corruption and violation of the pre-contract integrity pact of April 9, 2010 for a period of one year.

The Ministry’s exemption is applicable to the following: progress case to finalise the follow-on support contract (FoSC) on the revenue channel; to continue with the ongoing spares and maintenance supply cases on the revenue channel, where supply orders have already been placed; to progress cases for supply of spares and maintenance support that are “necessary to ensure uninterrupted sustaining” of the PC-7 Mk-II aircraft and its associated equipment, including simulators.

The MoD stated that the exemption from operation of suspension order is being granted subject to certain stipulations. “Air headquarters should obtain mean time between failures (MTBF) linked warranty within 3-4 months,” it stated.

Stipulations also state that the vendor discharges offsets without further loss of time as the prescribed time period has already elapsed and contractual obligations by the vendor is immediately undertaken and completed. “Exemption from operation of suspension order will have no impact on various probes by investigation agencies,” it further added.

The BTA is used for Stage I flying in the three-stage training schedule of the IAF to train rookie pilots. Second-stage training is done on Kiran trainers and third-stage on the BAE Hawk advanced jet trainers before the trainees move on to fly supersonic fighter jets.

A video of an argument over the Citizenship Amendment Act (CAA) between a few students from Jyoti Nivas College and some BJP workers surfaced on social media. Both the college authorities and the police played down the incident. A college lecturer said that the college was “apolitical” and it was a “minor scuffle that took […]

Having ruled the State for the most part of over five decades since it was carved out of Punjab on November 1, 1966, the four prominent political families — the Devi Lal clan, the Bansi Lal clan and the Bhajan Lal and the Hooda families — are caught in a high-stakes electoral battle in half […]

A memorial carved in Stone

On March 12, 1930, mohandas Karamchand Gandhi, and 80 comrades, embarked on a march from the Sabarmati Ashram in Ahmedabad to the village of Dandi on the coast of Gujarat. The march would take 24 days, cover a distance of 241 miles and Gandhi would be joined by tens of thousands of people. A museum […]