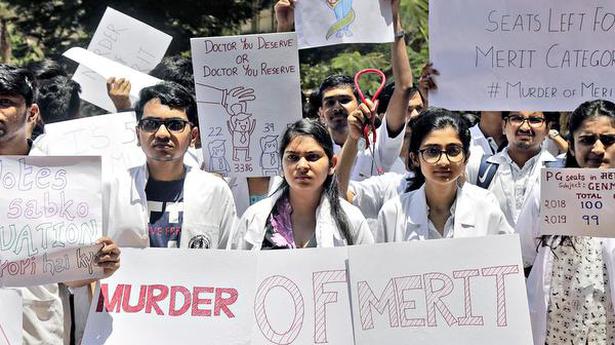 The MBBS students from the Government Medical College (GMC) in Miraj are gearing up to protest against the reservation in postgraduate courses. On Tuesday, nearly 200 students will carry out a silent march so that people know about their plight.

Students from medical colleges in Mumbai, Pune, Nagpur, and Aurangabad have organised similar protests in the past week.

“After studying for MBBS for 5.5 years, all the doctors are at par socially, economically and academically as well. We study under the same teachers, we live in the same hostels and draw the same stipend. There is absolutely no logic behind having reservations at the PG level,” said Murtaza Ranalawala, 20, a second-year MBBS student from GMC, Miraj, terming the quota unfair.

A press statement issued by the aggrieved students said that reservation in the State have reached 78% after the introduction of 16% Socially and Economically Backward Class (SEBC) quota provided by the current Devendra Fadnavis government and 10% Economically Weaker Section (EWS) quota being granted by the Central government, over and above the pre-existing 52% in the State. “The medical students say that their main demand is scrapping off all caste and category-based reservations in PG and introduction of a merit-based admission process just like in the case of super-specialisation courses,” the statement read. ,

It added that a government MBBS doctor earns a minimum of ₹60,000 a month which translates to about ₹ 7,20,000 a year and thus the question of economic backwardness does not arise at the level of postgraduate examinations.

“After learning 19 subjects and passing out of medical school with a graduate degree, the only identity is that of a doctor, the meritocracy of which depends upon the utilisation of equal educational opportunities provided to him/her at the level of undergraduate studies, and thus the question of backwardness does not arise,” the students said.

Students from GMCs across the State are discussing how to take the protest forward and are also planning to take legal recourse against the quotas.

Congress president Rahul Gandhi on Friday praised Hindustan Aeronautics Limited (HAL) for its role in the production of fighter jets in the past 70 years, but criticised Prime Minister Narendra Modi for allegedly sidetracking it in the Rafale fighter aircraft deal. Addressing a public rally near Sunabeda in Koraput district of Odisha, Mr. Gandhi said […]

Protest over arrest of Shruti Bellakki

The BJP took out a protest rally in Dharwad on Friday against the arrest of Shruti Bellakki, who faces the charge of making inflammatory remarks against Home Minister M.B. Patil through a video she posted online. Pralhad Joshi, MP, walked to the Deputy Commissioner’s office and submitted a memorandum to the government condemning her arrest. […]

A ryot’s Herculean effort to save his papaya crop

At the outset, this farmer’s resolve to save his 6.5-acre standing papaya orchard appears nothing short of a ‘Bhagiratha Prayathnam’ (a prodigious or Herculean effort) as explained locally as he has sunk more than 10 borewells to meet irrigation needs of the crop which is expected to reach the harvesting (fruit-cutting) stage in late May. […]