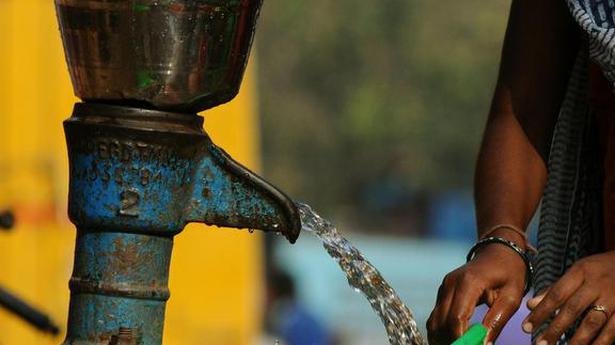 A “mission mode” has been adopted in Rajasthan for providing piped water supply connections to about 98 lakh households stipulated in a flagship Central scheme that envisages the supply of 55 litres of water per person per day to every rural house by 2024.

While the State Water Resources Minister, B.D. Kalla, has laid emphasis on generating public awareness for conservation of water, the Public Health Engineering Department (PHED) has initiated action to implement the Centre’s Jal Jeevan Mission by getting water from different sources, including rainwater harvesting, and bring piped water to households.

Chief Secretary D.B. Gupta said at a consultation with the PHED officers here on Thursday that since only 12% of the households in the State were currently getting piped water supply, a huge task lay ahead to meet the target. He said the necessary steps would be taken to complete the work within the time frame set for the mission.

Mr. Gupta said the Jal Jeevan Mission would be implemented under the State Water and Sanitation Mission, which was already functional. The State government would set up new committees under the mission in each district, he added.

Sandeep Verma, Principal Secretary, PHED, said the ongoing projects in the water sector would be expedited and steps taken to comply with the State water policy, besides involving other departments, such as Panchayati Raj and Urban Development, to ensure success of the mission.

The Union Ministry of Jal Shakti is holding discussions with all the States in five phases for their action plans under the Jal Jeevan Mission. The PHED officers from Rajasthan held deliberations at a workshop in Odisha’s Puri town last month.

The State had witnessed an increase of 19.3 % in the number of crimes registered under the Indian Penal Code (IPC) in the year 2017 compared with the previous year, the latest report by the National Crime Records Bureau (NCRB) reveals. The State stood at the eighth place in IPC cases in the country with […]

Pollution board seeks explanation from Dehu village on dead fish

The Maharashtra Pollution Control Board has sought an explanation from the Dehu gram panchayat for the thousands of dead fish found floating in the Indrayani river last week. “We have sent a notice to the Dehu gram panchayat on Wednesday, directing them to submit their response about the incident within the next 48 hours,” said […]