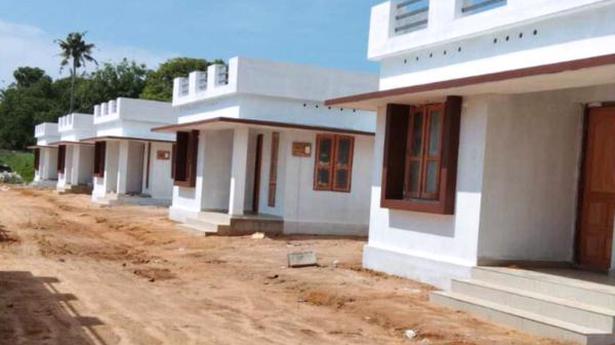 Phoenix, a Kudumbashree construction unit from Kottankara panchayat, has completed the construction of Alakkukuzhi rehabilitation project much ahead of schedule. A model project of the Kollam Corporation, it has a total of 20 houses in the 1.5 acre property divided into plots of three cents.

The Phoenix team took over the construction on January 1, 2018, and completed it by September, three months ahead of the deadline.

The 32-member team also included women from Kollam and Sasthamcotta, all of them trained in various trades by Kudumbashree Mission, Kollam.

The total cost of the project at Kachikadavu in Mundakkal division is ₹1.7 crore.

Apart from electrical and plumbing works, 1,600 working days went into completing the construction and the women received ₹800 per day along with ₹50 as travel allowance.

Kudumbashree Mission had trained over 250 women in the district and now it can handle the entire construction process without external assistance.

Though it was not easy for the women to get work when they started off, there has been no looking back since Kottankara panchayat handed over them a project to build 30 houses. Each woman in the unit has received an 85-day training in plumbing, electrical works and painting.

“It’s for the first time in the State that a Kudumbashree construction team has completed such a big project,” said Kudumbashree Mission district coordinator A.G. Santhosh.

Corporation had launched the project to rehabilitate the families who were living in a ghetto opposite Kollam railway station and the houses, finished with vitrified tiles, will be soon handed over to beneficiaries.

“In order to help them continue their occupation the Corporation will provide a public well and laundry stones,” said Mayor V. Rajendrababu.

The next target for the Kudumbashree construction units is to become government approved micro contracting agencies so that they can directly sign contracts with local bodies.

The Congress government in Rajasthan has accused the Centre of adopting a “discriminatory attitude” towards the State’s farmers, reflected in the lower targets set for procurement of mustard and gram on minimum support prices in comparison with the national average. A ceiling of 25-quintal purchase on a day has been set for the farmers. State […]

Election’s the time to make a quick buck

Elections have come as an opportunity for people to make a fast buck by participating in rallies and election campaigning. Contestants of various political parties and also independents in various municipal divisions in Karimnagar town are roping in the labourers and other women from various localities and deploying them for election campaigning in their respective […]

Based on a combination of numbers reported by the central Health Ministry, and updates from the States, the total number of confirmed cases in the country on March 23 stands at 425. All train, metro and inter-State transport services across the country were suspended on Sunday till March 31. On Sunday, India observed  a ‘Janata […]