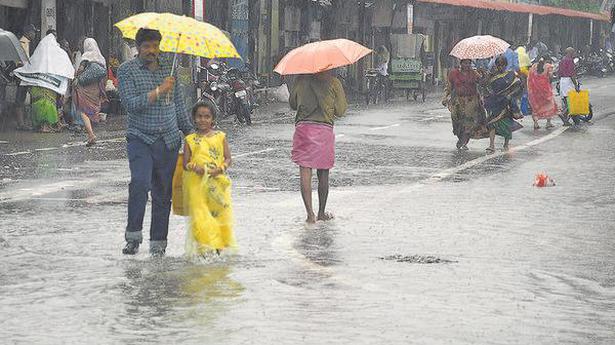 Many places in south Tamil Nadu are likely to receive moderate rainfall till Friday under the influence of the weather system that lies over the Comorin area.

Some places over the north Tamil Nadu too have chances of moderate rainfall till Friday, according to the Meteorological Department. On Tuesday, several weather stations across the State received a widespread rainfall. Tiruvarur recorded the highest rainfall of 7 cm, followed by Mamallapuram in Kancheepuram district and Valangaiman during the past 24 hours ending 8.30 a.m. Places in many other districts such as Cuddalore, Nagapattinam and Thanjavur also received moderate rainfall.

Officials said the well-marked low pressure area that lies over the Comorin area and adjoining equatorial Indian ocean is likely to intensify into a depression over the Lakshadweep-Maldives area and the adjoining southeast Arabian Sea on Wednesday.

S. Balachandran, Deputy Director General of Meteorology, Chennai, said, “We are expecting it to become a deep depression by Thursday near the Lakshadweep islands. We are monitoring the prospects of the system further intensifying into a cyclone in the Arabian Sea. South Tamil Nadu districts would experience more rainfall in this spell.”

Heavy to very heavy rainfall between 6 cm and 24 cm may occur in one or two places in the State, particularly in south Tamil Nadu, he added.