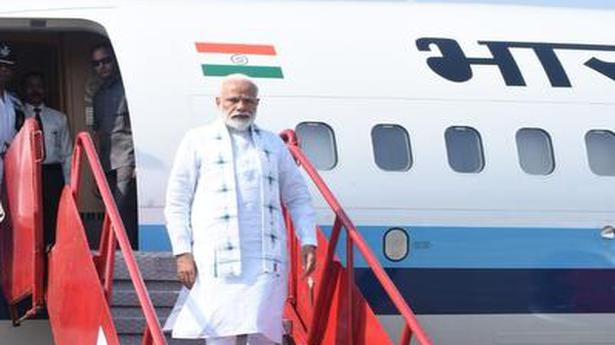 Prime Minister Narendra Modi on Monday conducted an aerial survey of Puri and Khurdha districts to get first hand information about the devastation caused by extremely severe cyclonic storm Fani.

Expressing shock over the magnitude of damage during a review at Biju Patnaik International Airport, Mr. Modi offered all possible helps to the State to tide over the crisis and wanted the Odisha government to share its disaster management skills so that other States could be apprised on this.

Chief Minister Naveen Patnaik and Union Petroleum and Natural Gas minister Dharmendra Pradhan were present at the meeting. Odisha government sought immediate release of ₹1,000 crore as adhoc assistance. A detail memorandum will be submitted after assessment of the damage.

Special interventions such as permission for FCRA clearance for contribution to Chief Minister Relief Fund and contribution of corporates to CMRF should be recognized as corporate social responsibility as allowed in case of PMNRF were sought in the meeting.

Taking this opportunity, Mr. Patnaik said the State deserved special category status for being the most disaster prone State in the country. Since 2013, the State government has witnessed disaster of different kinds almost every year.

In 2013, the State was hit by cyclone Phailin which was followed by flood, next year in 2014 cyclone Hudhud had caused extensive damage and in 2015, 2016 and 2017, droughts and heavy rain had triggered massive damage. Cyclone Titli in 2018 and Fani this year have impacted the State’s economy badly.

Meanwhile, the death toll due to Fani rose 35. Puri is worst affected district leading the table with 21 deaths, according to Special Relief Commissioners office. “The extent of damage could be gauged from the fact that 5030 km of 33 kv lines, 38613 km of 11 kv lines and 11077 number of distribution transformers and 79485 km of low tension lines were damaged,” said Special Relief Commissioner Bishnupada Sethi.

TDP supporters led by former Tadipatri MLA J.C. Prabhakar Reddy and YSRCP activists led by Rameshwar Reddy clashed at the Talaricheruvu Solar Plant of the A.P. Transco in Tadipatri mandal on Saturday seeking jobs for locals, especially their respective sympathisers. Trouble started when Mr. Prabhakar Reddy, who along with his supporters tried to enter the […]

Threatening tribal people and demanding rice and other consumables from them and asking them to join Maoist organisations are some of the offences the Kerala police have found suitable to invoke the provisions of the Unlawful Activities (Prevention) Act (UAPA) in Kerala during the last one year. In another instance, the police invoked the Act […]