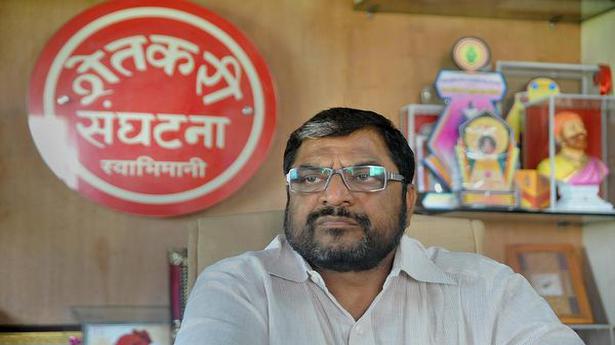 Farmers from even the BJP-ruled States have joined in the agitation, says two-time former MP.

On the Bharat Bandh called by the ‘All India Kisan Sangharsh Coordination Committee’ (the umbrella body comprising nearly 250 farmer outfits) on December 8, Mr. Shetti said in Sangli the Centre was attempting to give the farmer agitation a ‘regional’ and ‘casteist’ smear by branding the protests as a stir by farmers hailing from the Punjab and Haryana.

“Ludicrous and dangerous propaganda to the effect that pro-Khalistani separatists have infiltrated the farmers’ movement and that only Sikh farmers are agitating. Farmers across the country stand behind their counterparts in the north. Farmers from the BJP-ruled States are also participating in it,” he said, alleging that farmer leaders from the south were deliberately prevented by the Central authorities from joining the agitation.

The two-time former MP from Hatkanangale in Kolhapur said the allegations of the farmers holding the government hostage were utterly unfounded.

“It must be stressed that we have been continuously writing to the Centre to try and engage them in a meaningful dialogue…this, regrettably, has not happened. Are we to be slaves of corporate houses like Ambani and Adani? We were compelled to give the ‘Chalo Delhi’ call on November 26 as we had no other option,” he said.

Stating that the Centre and the Delhi police were digging trenches to stop the farmers heading towards Delhi, he questioned whether the Centre looked upon them as extremists or foreigners?

“Today, we cannot reach the capital of our own country to present our demands to the government…The purpose behind this nationwide shutdown on December 8 is to wake the Centre up. Even some civilians have returned the honours conferred on them by the government,” he said, exhorting not only farmers but ordinary citizens also to participate in this shutdown.

Remarking that the agitation was an existential struggle for farmers, Mr. Shetti appealed to other traders to keep their businesses closed, as well as people from all walks of life including writers, activists and others to show their support for farmers.

Supreme Court against spike in air traffic over Taj Mahal

The Supreme Court on Wednesday prima facie agreed to the Airports Authority of India’s (AAI) request to build an extra terminal at Agra airport, but forbid any increase in air traffic to the detriment of the world heritage site of Taj Mahal, other monuments and the people living in the area. A Bench led by […]

What are the laws in place to tackle illegal non-citizens?

The story so far: The Home Minister Amit Shah’s announcement in the Rajya Sabha earlier this week that a National Register of Citizens (NRC) will be implemented across India, and repeated again in Assam, has ignited interest in the existing legal framework in India for illegal migrants. The first enactment made for dealing with foreigners […]