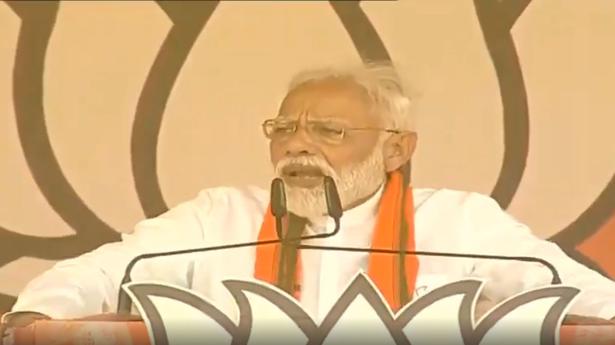 Prime Minister Narendra Modi on Friday evoked the 1984 anti-Sikh riots in Haryana’s Rohtak to target the Congress party in the backdrop of Sam Pitroda’s remarks over the riots.

Mr. Modi said: “This leader (Sam Pitroda) is close to the Gandhi family… he is their confidant… he is the ‘Guru’ of the ‘naamdaar’ president of the party. Several Sikh families were killed during 1984 riots. In Delhi alone over 2,800 Sikhs were killed – but for Congress leaders it’s only ‘Hua To Hua’.”

Mr. Modi, said people will never forgive the Congress party for its arrogance and would teach a lesson to Congress, which due to its anti-people approach has already been reduced to 44 seats in the Lok Sabha.

Mr. Modi said that when the Samjhauta Express blast took place near Panipat, the Congress targeted and harassed innocent people in the name of Hindu terrorism, but later their conspiracy was exposed.

Mr. Modi also took a dig at the Congress on national security and corruption issues, saying the grand old party has such a poor history that it can not boast anything when it comes to nation’s security and defence.

“BJP government made a strong defence policy for the country whereas the Congress, which remained in power for seven decades kept silent on defence policy for the country. Before 2014, day in and day out Pakistan did brutality with our soldiers and the Congress government at the Centre restricted itself to only giving statements. But the strong government that you brought to power gave strength to the brave soilders and we gave them a free hand to tackle the situation on the spot,” he said.

The Prime Minister again launched a veiled attack against former Congress president Sonia Gandhi’s son-in-law Robert Vadra and former Chief Minister Bhupinder Singh Hooda, saying Congress leaders involved in corruption have been taken to the court and would be put in jail within the next five years.

Another COVID-19 positive case was recorded in Pune in the past 24 hours, taking the total number of patients in the city to 16 and the tally in Pune district, including Pimpri-Chinchwad, to 28. COVID-19 | Interactive map of confirmed coronavirus cases in India According to the district authorities, the new case is apparently another […]

HC holds TSLPRB to its notification on qualification

Subodh Yadav, Regional Commissioner, Kalaburagi division, appeared to be hard-nosed on Tuesday when he was discussing the illegal encroachment of government lands by private parties. Taking serious note of the issue, he directed officials of the Revenue Department to take stringent action against the encroachers. “Before setting off on the clearance drive, collect data on […]