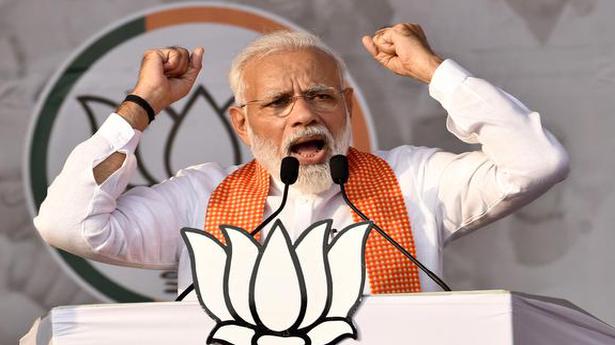 Hours after the CBI filed a chargesheet accusing former Finance Minister P. Chidambaram of corruption, Prime Minister Narendra Modi warned of a similar fate to other Opposition leaders responsible for the “banking and economic mess”.

Mr. Modi was addressing his last electoral rally in the financial capital on Friday.

“For 10 years those who destroyed the country’s economy and the banking system are either lodged in the Tihar jail or the jails in Mumbai. This clean-up drive has only begun now and it will only speed up under my government,” he said.

The Prime Minister said while his government had got rid of the angel tax, the previous Congress and the Nationalist Congress Party (NCP) regimes had only worked to “implement it haphazardly”.

The BJP government rationalised the corporate tax but the previous regimes only implemented it without any thought, he said.

He also blamed the previous governments in the State for slowing down infrastructure works, including the Mumbai Trans Harbour Link (MTHL) project, Mumbai Metro, and the Navi Mumbai International Airport projects which have been lagging for years.

Urging voters to remember the times the city went through multiple terror strikes, Mr. Modi said the BJP government had managed to provide safety and security to the financial capital. The words like Balakot and surgical strikes are not symbolisms for the party, but proof of its zero tolerance policy towards terrorism, he said.

Mr. Modi also hit out at NCP for its alleged deals with the underworld. while failing to provide justice to the 1992 blasts victims.

Hundreds of fossil tree trunks dating back to the prehistoric period and abundantly found in Kadagampattu and villages abutting the country’s first National Fossil Wood Park in Thiruvakkarai, are turning into dust and being used for laying roads due to unbridled quarrying of red laterite soil. Indiscriminate quarrying has changed the landscape in Kadagampattu, destroying […]

The Lok Sabha landscape is going for a makeover with many losing the coveted rooms and many others for the first time managing to get space to put up their nameplates. A party’s strength in both Houses dictates who gets prime real estate in the building which usually is the ground floor. Those with poor […]

Kochi to have 1,000 shared bicycles

It is expected that bicycling and other modes of non-motorised transport (NMT) will get an impetus in Thiruvananthapuram, Kochi, and Kozhikode, with the Assembly passing the Kerala Metropolitan Transport Authority (KMTA) Act on Friday. In Kochi, the KMRL was the first to launch an organised bicycle-pooling system over a year ago, for which it tied […]