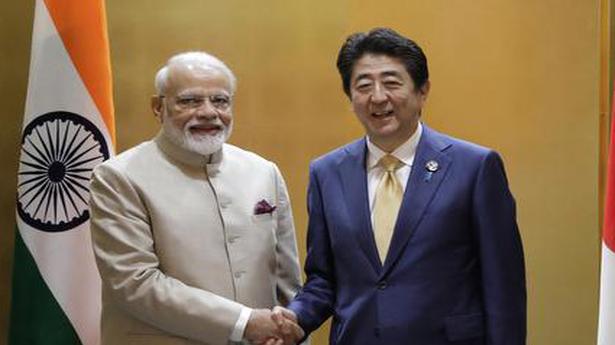 Prime Minister Narendra Modi and his Japanese counterpart Shinzo Abe held talks on Thursday during which they discussed a wide range of issues of mutual interest.

This was the first meeting between the two leaders since the start of Japan’s Reiwa era.

Mr. Modi also thanked Mr. Abe for his warm welcome to him and the Indian delegation visiting Japan for the G20 Summit. He also appreciated Japan’s leadership as the G20 chairman.

“PM @narendramodi met Japanese PM @AbeShinzo ahead of the #G20Summit. Discussed broad range of topics of mutual interest. PM said that he was looking forward to visit of PM Abe to India later this year for the Annual Summit,” Ministry of External Affairs (MEA) spokesperson Raveesh Kumar tweeted.

The Prime Minister congratulated Abe and Japan’s citizens for the start of the Reiwa era. The term for the new era is made up of the two characters Rei and Wa. Rei can mean “commands” or “order”, as well as “auspicious” or “good”.

Wa often means “harmony”, and is also used in the Japanese word for “peace” — hei-wa.

UN conference on desertification kicks off

The 14th United Nations Conference of Parties (COP) to combat desertification kicked off in New Delhi on Monday with India taking over the presidency of the COP for two years. Prime Minister Narendra Modi is expected to address the convention next Monday, with senior ministers from nearly 70 countries expected to participate at that session. […]

PM launches ‘One Nation One Card’

Prime Minister Narendra Modi on Monday launched the indigenously-developed National Common Mobility Card (NCMC) to enable people to pay multiple kinds of transport charges, including metro services and toll tax, across the country. Dubbed as ‘One Nation One Card’, the inter-operable transport card would allow the holders to pay for their bus travel, toll taxes, […]