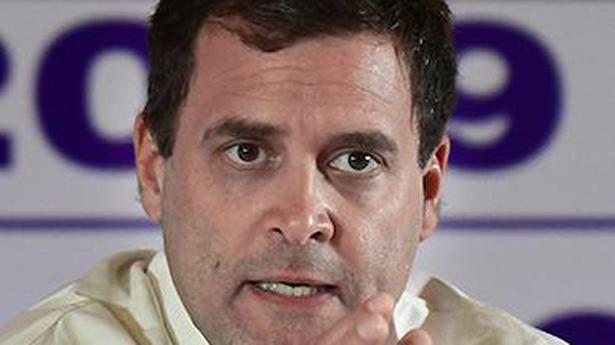 Hitting the hustings for the first time since the Congress’ Lok Sabha debacle earlier this year, party leader Rahul Gandhi on October 13 accused Prime Minister Narendra Modi and Union Home Minister Amit Shah of “deflecting” the core issues and asking youths to “watch the moon” when they are demanding jobs.

Mr. Mr. Gandhi also accused the media of distracting people’s attention from the “real issues” like the “downfall of the economy”. He claimed that “divisive politics” was one of the reasons behind the closure of scores of factories in the country.

With the BJP seeking to weave the narrative for the October 21 Maharashtra elections around the withdrawal of special status of Jammu and Kashmir and nationalism, Mr. Gandhi targetted Mr. Modi and Mr. Shah over the state of the economy and unemployment.

He said the PM and Mr. Shah are maintaining “convenient silence” on the real issues plaguing the country.

“By sending a satellite to the moon, you cannot feed the poor people of this country. Such missions will not finish hunger of our youths,” Mr. Gandhi said in an apparent reference to Mission ‘Chandrayaan 2’ though he commendable the ISRO for the achievement.

BJP leaders have been raising the ambitious moon mission as one of the achievements of the Modi government during campaigning. The mission, which envisaged soft-landing of a lander on lunar surface, had failed to achieve its intended objective.

“The real focus of Narendra Modi and Amit Shah is to divert the attention of the people towards Corbett Park, the moon, China, Pakistan, Japan and Korea among others. They are conveniently silent on the issues that are plaguing the country,” said Mr. Gandhi while addressing a rally for Congress candidate from Ausa Assembly segment in Latur district.

Corbett Park was an apparent reference to British adventurer Bear Grylls’s show ‘Man vs Wild’ in Hindi which featured the Prime Minister walking through the wild in the Jim Corbett National Park in Uttarakhand.

Mr. Gandhi, who had led the Congress campaign against the BJP and the PM on the theme of “Rafale irregularities” in the Lok Sabha polls, also sought to paint the grim picture of the economy and job scenario.

“Unemployment has reached its highest mark in the last 40 years. More than 2,000 factories in the country have been closed down. The automobile sector is shattered,” said Mr. Gandhi, who is a star campaigner for the Congress in the crucial elections.

Mr. Gandhi said he has come to know about “woes” of the garment and diamond industries in Gujarat, the home state of the Prime Minister.

“In my recent visit to Gujarat, I realised about the woes of the garment and diamond industries, but the media is not talking a single word about it. Nobody will raise question on Narendra Modi. You must look closely what exactly is happening,” Mr. Gandhi said.

He added, “If you ask about the current problems facing the people in any corner of the country, the common answer will be ‘devastated farmers and unemployment’… If you ask farmers about their situation, their answer is: Modiji has destroyed us.”

The Wayanad MP said the Modi government waived (loans) to the tune of ₹5.5 lakh crore of some 15 people including rich corporates in the last few years.

“Most of the media houses are owned by big corporate houses and some of their names are well-known such as Ambani, Adani etc. The Modi government has waived ₹5.5 lakh crore [loan] of these people even though the rural employment scheme like MNREGA needs only ₹35,000 crore,” he said.

Mr. Gandhi alleged that if a farmer failed to repay his debt, he is sent to jail, but on the other hand outstanding loans of big corporates are being declared as NPAs (Non-Performing Assets) and “banks are opening their doors to such corporate houses once again“.

He also alleged the real objective of moves like demonetisation in 2016 and rollout of Goods and Services Tax (GST) was to help the rich at the cost of the poor people.

“The real target of the note ban and GST was to take out money from pockets of poor and give it to the rich,” he claimed.

Mr. Gandhi reiterated his charge that no corrupt person had to stand in queues outside ATMs to withdraw money during the note ban.

“Modi came with a promise of ending corruption and imposed note ban, but did you see any corrupt person standing in queues outside ATMs or any bank? Queues were full of poor people, labours, farmers, and the common man. The money was taken from them and utilised for waving the loan of thieves like Nirav Modi and Mehul Choksi,” he claimed.

Mr. Nirav Modi and Mr. Choksi are wanted by various agencies for their alleged role in the multi-crore Punjab National Bank (PNB) scam.

“If you ask any small or medium scale businessmen about the impact of GST, their reply will be ‘Satyanash’ [destruction]. They are devastated with the taxation system,” he said.

Mr. Gandhi said non only the people from Maharashtra but those from Kashmir to Kanyakumari and Gujarat to West Bengal are also at the “receiving end” due to policies of the Modi government.

He also sought to know if Mr. Modi, during his recent meeting with Chinese President Xi Jinping, asked the latter about the 2017 Doklam standoff.

He was referring to the alleged incursion of Chinese troops into the Indian territory in 2017.

“Did Modi ask the Chinese president about what did they [Chinese] do in Doklam? Did media ask Modi about whether he had raised the issue of Chinese military entering our territory at Doklam?” he asked.

Taking potshots at the Centre’s ‘Make in India’ programme, Mr. Gandhi said ‘Made in China’ products have flooded markets in India. “It seems the Chinese youths are getting employment,” he added.

“Though media projected that this decision has been highly welcomed…but what did Modi government give to farmers?” he asked.

Mr. Gandhi said the downfall of the economy has just begun.

“You will see how badly we will suffer in the coming days. The decade-long works of the Congress to boost the economy is done away by the Modi government. Hence, they keep talking about Kashmir and Article 370; country’s mission to the moon etc, but they will never utter a single word about the crucial issues in the country,” he alleged.

Referring to “divisive politics”, Mr. Gandhi said India progressed because people of all the religions, faiths and castes have worked together.

“The more you divide this country, more this country will suffer. This divisive politics is also one of the reasons behind the closure of factories….rise in unemployment will worsen further,” he said.

Chief Secretary said home quarantine for those meeting requirements laid down in the standard operating procedure was encouraged as government quarantine facilities may be insufficient to accommodate all returnees. Source: thehindu.com Related

A meeting of senior officials of the revenue, police and excise departments in the border districts of Kerala, Karnataka and Tamil Nadu concluded at Vythiri here on Thursday. The meeting, chaired by Wayanad District Collector A.R. Ajayakumar, decided to intensify various preventive measures, including steps to check smuggling of liquor, in the wake of the […]

Amid exodus of Muslim members, M.P. BJP reaches out to them

The BJP’s insouciant response to minority members quitting in droves over the Citizenship (Amendment) Act, a challenge it is grappling with in Madhya Pradesh, has propelled a spiralling spate of resignations showing no signs of abatement. But faced with a sturdy Congress government treading cautiously on policy matters, recent setback in the Jhabua Assembly byelection […]