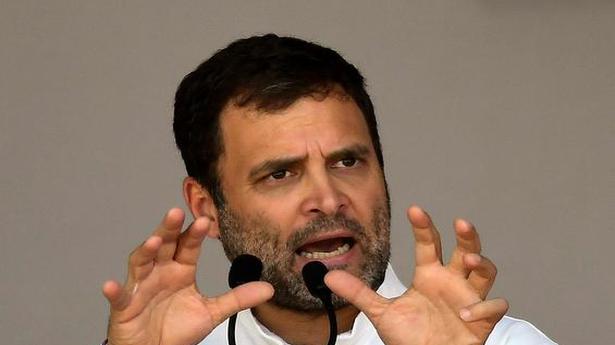 Congress president Rahul Gandhi on Friday praised Hindustan Aeronautics Limited (HAL) for its role in the production of fighter jets in the past 70 years, but criticised Prime Minister Narendra Modi for allegedly sidetracking it in the Rafale fighter aircraft deal.

Addressing a public rally near Sunabeda in Koraput district of Odisha, Mr. Gandhi said engines of MiG and Sukhoi fighter aircraft were made at the HAL unit in Sunabeda. The country’s youth, especially the ones from Odisha, extended their hands to protect the country through this unit. “But the Prime Minister, who speaks of nationalism, handed over the money of the Air Force to Anil Ambani, who has never manufactured any aircraft”, he said.

He said that while HAL had no pending loans, Mr. Ambani had a ₹. 45,000- crore loan on his head. The United Progressive Alliance government had decided to give the contract for manufacturing Rafale aircraft to the HAL. The rate of each of the 126 aircraft had been escalated from ₹. 526 crore to ₹ 1600 crore only to benefit Mr. Ambani, he alleged.

“President of France says Indian Prime Minister had made it clear that if Rafale aircraft were to be bought, then HAL will not be involved in its production and Mr. Ambani should get the contract for it”, he said. France would surely gain money from the Rafale deal, but the youth of Odisha would not get anything from it, he added.

Mr. Gandhi promised loan waiver for farmers and a hike in the minimum support price of paddy to ₹. 2500 a quintal in Odisha in 10 days if the Congress comes to power. He alleged that four to five officers were running the Odisha government and a few friends of Chief Minister Naveen Patnaik were getting the benefits.

Before the public meeting, Mr. Gandhi interacted with a group of women on the occasion of Women’s Day. He promised to get the women’s reservation bill passed and a policy of zero tolerance towards atrocities against women, if his party came to power.

He also promised free education, be it technical education, medical or any other field, to all women if the party came to power.

Only a section gets the package benefits, says TDP chief Source: thehindu.com Related