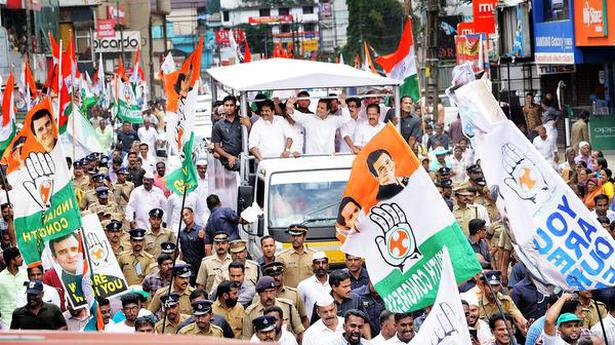 Stepping up his attack on the Prime Minister on the second day of his visit to Wayanad, Congress president Rahul Gandhi said Narendra Modi’s Lok Sabha election campaign was filled with ‘lies, poison and hatred’, but the Congress stood for truth, love and affection.

Mr. Gandhi, who is in his constituency on a thanksgiving three-day visit after being elected to the Lok Sabha, addressed party workers at six roadshows at Kalpetta, Kambalakkad, Panamaram, Mananthavady, Pulpally and Sulthan Bathery, braving the scorching sun.

Addressing a crowd at Kalpetta, Mr. Gandhi said Mr. Modi ‘uses hatred, anger and lies’, which are his ‘weapons’. The Congress will continue to fight the ‘worst sentiments’ the Prime Minister represents. ‘‘He [Mr. Modi] might have all the institutions, channels, media, all the money in the world, all the rich business men. But we have truth by our side.’’

Thanking voters at Bathery for electing him with a huge majority, Mr. Gandhi said the issues of the hill district were highly complex and a joint attempt was needed to address them. “I belong to the Congress party, but my doors are open to every single citizen of Wayanad irrespective of the ideology they believe in,” Mr. Gandhi said. “My job is to listen to the people of the constituency, understand their difficulties and work with them to improve their life.”

Twenty-seven delegates submitted memorandums on issues pertaining to the district. Mr. Gandhi assured them that he would raise them in the Parliament.

Mr. Gandhi will leave for New Delhi from the Karipur international airport on Sunday after visiting Engapuzha and Mukkam in the Thiruvambady Assembly segment, which comes under the Wayanad Lok Sabha constituency, in Kozhikode district.

CPI(M) general secretary Sitaram Yechury has filed a writ petition in the Supreme Court for production of party leader Mohammed Yousuf Tarigami, who has been under detention in Jammu and Kashmir since the Centre abrogated provisions of Article 370, the party said on August 24. Mr. Tarigami, a member of the Central Committee of the […]

Will remain a strong ally of DMK: VCK

VCK general secretary D. Ravikumar on Tuesday said the party would continue to be a strong alliance partner of the DMK. Speaking to The Hindu, he said the VCK had never been in a position to dictate terms to bigger parties. “The DMK and the AIADMK are in a position to decide who their allies […]