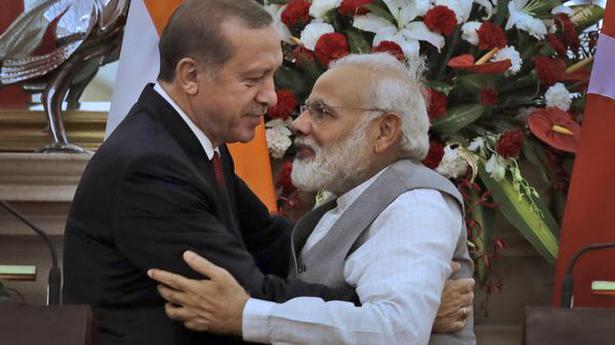 The Government of India (GoI) has decided to put off a proposed visit by Prime Minister Narendra Modi to Ankara, as a part of a number of measures showing its displeasure over Turkish President Recip Tayyip Erdogan’s UNGA (United Nations General Assembly) speech last month where he criticised its move on Article 370 in Jammu and Kashmir.

According to sources, the visit, which had been discussed when Mr. Modi met Mr. Erdogan in Osaka in June last, is unlikely to take place by year-end, as planned earlier.

Official sources said India’s sharp criticism of Ankara’s military operations in Syria this week, as well as an “expected” decision to cancel the selection of Turkey’s Anadolu shipyard to build naval support ships for it followed its “unhappiness” over Turkey’s stand on Kashmir.

When asked, Ministry of External Affairs officials said no such visit by the Prime Minister was under discussion. However, Turkey’s Ambassador to India Şakir Özkan Torunlar told The Hindu that Mr. Modi’s visit was expected by his government.

“It is not just an expectation [PM Modi’s visit to Turkey]. It has been discussed recently, and we are now awaiting on alternative date proposals according to the PM Modi’s schedule in the next couple of months. The Government of India has to decide, but it certainly is being discussed, and we are awaiting dates from the South Block,” he said.

Official sources also confirmed to The Hindu that the $2.3 billion tender granted to Turkey’s Anadolu Shipyard earlier this year to help build five 45,000-tonne fleet support ships for the Hindustan Shipyard Limited is likely to cancelled.

While the sources noted that rules for local procurement and security concerns over Anadolu’s work for the Pakistan navy were reasons for the likely cancellation, diplomatic sources said Turkey’s recent statements and its support for Pakistan at the Financial Action Task Force (FATF) on terror financing were also considered.

When asked, the Turkish Ambassador said he hoped the tender is retained. “It is a commercial issue; so I don’t know what will happen. Whenever PM Modi has spoken to President Erdogan, he has spoken of his “Make in India” concept and his desire to build ‘Smart Cities’. So we would like to go ahead with the shipyard project and not put it aside,” Mr. Torunlar stated.

To a query if India-Turkey ties had suffered as a result of the recent developments, he said he didn’t think “one vertical”, where there are differences, should “define the fate” of bilateral relations.

“There may be one vertical, which doesn’t make India happy, but in other areas, we can work. Turkey too has other issues like the presence of Fethullah Gulen- affiliated terror groups in India… but we don’t bring that vertical on top of all other bilateral relations,” he said.

Pointing to the visit of Chinese President Xi Jinping to India last week, despite Beijing’s criticism of the government over Kashmir actions, he said it was a proof that India worked in various “verticals”.

The Ambassador said his government had not reacted to New Delhi’s criticism of Turkey’s “unilateral military offensive” against Syria on October 10, as all countries were “welcome to comment” on a global issue.

“I think the purpose of Turkey’s operation was not very well understood when the statement was made. But after it was made clear that this was a counter terrorism programme, we haven’t heard anything further [from India],” he said, defending Turkey’s Operation Peace Spring along its border with Kurdish-held parts of northeast Syria. He claimed that all operations were on “legitimate terrorist targets” and claimed “zero civilian casualties”.

On Friday, in a joint statement with the United States, Turkey agreed to “pause” the operations for 120 hours to ensure the safety of civilians and to allow those belonging to the Kurdish groups YPG (PKK) to withdraw from the 32-km ‘safe zone’ along the border.

According to Mr. Torunlar, the operations would allow 4 million Syrians living in Turkey since 2011 to return to their homes. He also denied reports that the operations had liberated Islamic State (IS) terrorists from prisons in the safe zone, and accused YPG militia of having released them.

“We are on the same page as India in countering terrorism,” Mr. Torunlar added, but declined to comment on any comparisons to the government’s position that operations in Jammu and Kashmir also targeted only terror groups.

(With inputs from Dinakar Peri)

RPI (A) to contest municipal polls in State

National president of Republican Party of India (A) and Union Minister of State for Social Justice and Empowerment Ramdas Athawale has demanded that the State governments should give five acres of land to all landless poor irrespective of their caste to eliminate poverty. Mr. Athawale reviewed implementation of social welfare programmes with State government officers […]

Air India’s jumbo B747 aircraft reached Delhi on February 1 morning after evacuating 324 Indians from China’s coronavirus-hit Wuhan, the epicentre of the deadly coronavirus outbreak, officials said. The plane, carrying 211 students, 110 working professionals and three minors, reached Delhi around 7.30 am, they said. Another flight of the airline departed for the Chinese […]