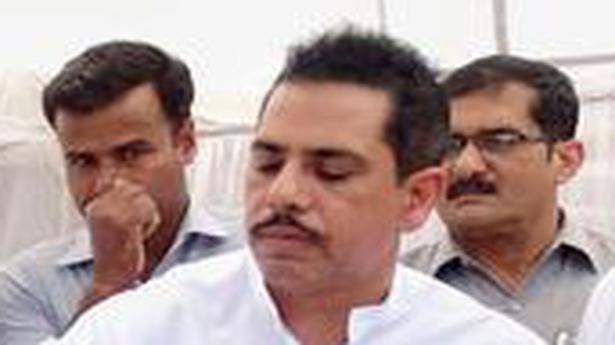 The Delhi High Court on Thursday granted more time to the Enforcement Directorate (ED) to submit its response to a plea of Congress general secretary Priyanka Gandhi Vadra’s husband Robert Vadra challenging a money laundering case against him.

A Bench of Justice Hima Kohli and Justice Vinod Goel asked the ED to respond to the plea of Mr. Vadra and his close associate, Manoj Arora that challenged certain provisions of the Prevention of Money Laundering Act (PMLA) within a week.

The court listed the matter on July 18 for further hearing.

The ED’s case against Mr. Vadra relates to alleged purchase of a London-based property worth 1.9 million pounds.

Mr. Vadra, apart from challenging the enforcement case investigation report (ECIR), has also questioned the constitutional validity of certain sections of the PMLA, 2002. He alleged that the report was registered in order to “harass and humiliate” him. He contended that investigating agencies had probed land deals in Rajasthan and Haryana, but did not find anything against him or his firms.

“However, in order to harass and humiliate the petitioners, another ECIR was registered into the same deals. It was in this wake of the matter that the Rajasthan High Court directed that no coercive steps be taken against the petitioner,” the plea said.

Dubbing the BJP’s Amethi candidate Smriti Irani as an “outsider”, Congress leader Priyanka Gandhi Vadra on Monday accused her of distributing shoes in order to insult Rahul Gandhi and said the people in the Congress president’s Lok Sabha constituency are not beggars. Interacting with the voters in this key parliamentary constituency, Ms. Vadra, the Congress […]

Tiger reserve tag is a distant dream for WWS

The Wayanad Wildlife Sanctuary (WWS), home to the largest number of tigers in the State, is losing out on tiger reserve status following resistance by the local people. The sanctuary, spread over 344.44 sq km, is an integral part of the Nilgiri Biosphere in the Western Ghats and contiguous to the tiger reserves of Nagerhole […]

The Edappal grama panchayat has launched a programme to convert the 33 anganwadis under its jurisdiction into centres of excellence. The anganwadi facelift programme is being implemented in association with Patha Foundation, an Edappal-based charity organisation. A workshop was organised for anganwadi teachers as part of the Poompatta programme. Trainer Vandana Rao led the workshop. […]