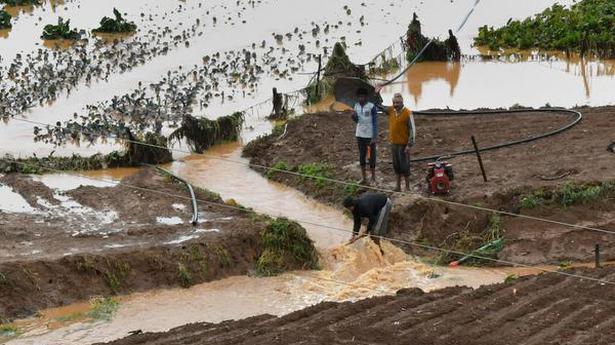 The depression that has caused torrential rainfall mainly in Kerala, Karnataka, Maharashtra and Tamil Nadu, claiming at least 70 lives and forcing the evacuation of tens of thousands of people, is expected to abate from Saturday, the chief of the India Meteorological Department (IMD) said on Friday.

The Congress Working Committee (CWC), the party’s highest executive body, will start the formal process of finding a replacement for outgoing president Rahul Gandhi, but a final decision will take a few more days.

The Hindu’s Srinagar Correspondent Peerzada could recount the gruelling days as Jammu and Kashmir’s geography became history — when there was no means to know about the situation in J&K, or outside.

Ramping up its Independence Day celebration plans after the Centre revoked Jammu & Kashmir’s special status on August 5, the Bharatiya Janata Party’s State unit intends to distribute 50,000 Indian flags to its workers to hoist on August 15.

The BJP on Friday kicked off poll preparations for Maharashtra, Jharkhand, Haryana and Delhi where Assembly elections are due in the coming months. Party president Amit Shah appointed Union Ministers Prakash Javadekar and Narendra Singh Tomar and party general secretary Bhupendra Yadav as the election in-charge for Delhi, Haryana and Maharashtra, respectively.

NDTV founders Radhika and Prannoy Roy were on August 9 stopped at the Mumbai airport and prevented from travelling abroad. In a statement, the Roys said that this amounted to denial of their basic rights.

“The Health Ministry has drawn an ambitious plan under the 100 days agenda of the newly elected government, wherein it has been decided to provide Rotavirus vaccine to every child across all States and Union Territories by September, 2019,” Union Health Minister Harsh Vardhan said on Friday.

The Supreme Court on Friday refused to be diverted from its own order to hear the Ayodhya title appeals on a day to day basis, which includes hearing the case from Monday to Friday every week till it is over.

China on Friday backed the resolution of the Kashmir issue on the basis of the UN Security Council resolutions as well bilateral agreements between India and Pakistan — a veiled reference to the Shimla accord of 1972.

Common Service Centres (CSCs) , which come under the Ministry of Electronics and IT, plan to open one lakh charging stations for electric vehicles across the country in the next few years, as the country plans to transition to such vehicles from the current combustion engine-powered automobiles.

A Delhi court on Friday framed charges against expelled BJP MLA Kuldeep Singh Sengar for allegedly raping a minor girl in Uttar Pradesh’s Unnao in June 2017. He will also be tried under the Protection of Children from Sexual Offences (POCSO) Act.

The Trinamool Congress has massively coordinated its pre-poll campaign to bag most of the seats that go to the polls on Tuesday. Not only has the party stepped up the number of rallies compared with last time, it has also engaged Suvendu Adhikari, their key election manager of south Bengal, in the north to enter […]

India got help from WhatsApp and Facebook servers in the U.S. to secure conviction in a 2018 Khalistani terror case. Security agencies have been asked to focus on cases involving Khalistani elements as India seeks to restrict the movement of suspects based in the U.S., the U.K., Canada and Australia involved in the conspiracy. “The […]