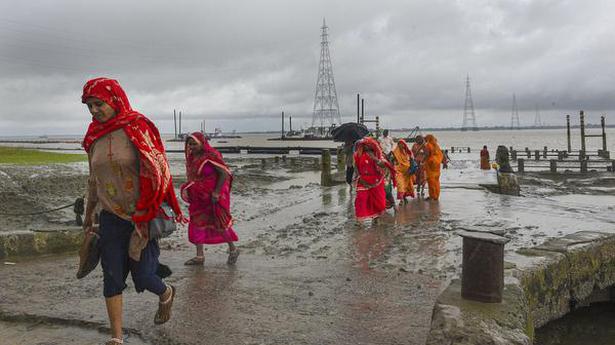 BJP’s legislative leader Devendra Fadnavis will now have to prove majority in the House of 288 members by 8.00 P.M. on November 11.

Severe cyclonic storm ‘Bulbul’ made landfall at midnight on November 9, between Sagar Islands of West Bengal and Khepupara in Bangladesh, hurtling northwestwards into the neighbouring country over the Sunderban delta, with two deaths reported in its wake. Gale wind with speed of 110-120 kmph with gusts up to 135 kmph prevailed along and off the coastal and adjoining districts of West and East Midnapore, South and North 24 Parganas as the eye of the storm made landfall around midnight.

Behind this judgment is a 70-year-long litigation, which, in turn, was foreshadowed by a legal dispute, albeit settled quickly, in the 19th century. The legal battle over the possession of a 2.77-acre piece of land is now over.

Here is a backgrounder on the suits, issues and developments that led up to the Allahabad High Court verdict of 2010.

The Supreme Court verdict on the Babri Masjid-Ramjanmabhoomi land dispute has left the people of Ayodhya divided on predictable lines. The Hindu populace celebrated the order but it triggered a sense of dejection among the Muslim community of Faizabad-Ayodhya.

Delhi’s air quality improved to “poor” on Saturday, from the “very poor” category , and is expected to be slightly better on Sunday, according to the Central Pollution Control Board.

Saudi state oil giant Aramco will sell 0.5% of its shares to individual retail investors and the government will have a lockup period of a year on further share sales after the initial public offering, its prospectus said on November 9.

Luiz Inácio Lula da Silva, President of Brazil from 2003 to 2010 who retired with more than 80% approval rating, was convicted in a corruption case in 2018. On Thursday, the country’s Supreme Court ruled that it is “illegal to imprison defendants until their appeals process has fully played out”, making the way for Mr. Lula’s release. He is now all set to hit the streets campaigning against the right-wing government and President Jair Bolsonaro, and the winds may gather more speed in Brazil.

After a historic victory in the first T20I, Bangladesh’s momentum took a massive hit after brutal, unfiltered aggression from Rohit Sharma helped India steamroll the visitors in 2nd T20I to draw level. What the nature of that victory means is that India will go into the series-deciding third T20I at the VCA Stadium today firmly believing it has the upper hand. The momentum has decisively shifted.

Lionel Messi produced a set-piece masterclass, netting-in two exquisite free kicks on his way to a hattrick. Barca lead the standings on 25 points after 12 games, level with second-placed Real Madrid who eased to a 4-0 win at Eibar.

The third edition of Mumbai Collective began on Sunday and features sessions on Rafale deal, distortion of history and rise of the surveillance state. R. Ramakumar, chief organiser, had said that they wanted a mass collective, and different kinds of protests, not just speeches, talks, but also cultural forms of resistance: songs, poetry, paintings, photographs. […]

The recoveries surged to 9,52,743 on July 28 pushing the recovery rate to 64.24%, according to the Union Health Ministry data Source: thehindu.com Related

India expects the newly-elected President of Sri Lanka Gotabaya Rajapaksa to boost the national reconciliation policy with the Tamil community of the country, the Ministry of External Affairs (MEA) said on Thursday. MEA spokesperson Raveesh Kumar said the message was conveyed by Minister for External Affairs S. Jaishankar during his visit to Colombo on Tuesday, […]