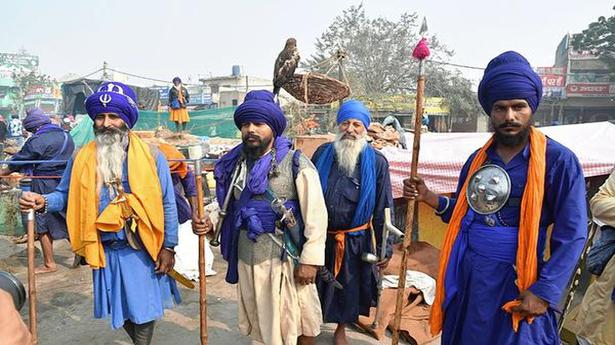 Dimming hopes of a compromise, a joint front of protesting farmer groups on Friday rejected the Centre’s proposals to amend the three contentious agriculture laws and called for a ‘Bharat Bandh’ on December 8 to widen the agitation. The front reiterated the farmers’ demand for a total repeal of the three Central laws.

A petition in the Supreme Court on Friday sought a direction for the “immediate removal” of protesting farmers from Delhi’s borders, by applying its judgment in the Shaheen Bagh case that dissent should not intrude on public movement.

The tracking and monitoring of nutrition services to the poorest of the poor in India have been hampered by the lack of online data. Jagriti Chandra reports how this has affected pregnant women in a pandemic year when hunger and poverty have worsened.

“Going forward, if we have to continue at the borders, we will not just sit and eat. We will use social media like Facebook and Twitter to mobilise, plan protests, and marches inside Delhi while we remain here. The eventual plan will be to shut entry to, and exit from, Delhi completely,” said Ranjeet Singh (34), a farmer from Bhatinda.

The Supreme Court was livid on Friday to find that the Centre kept a condemned man’s plea for presidential mercy hanging in limbo despite having decided over a year ago to spare his life. Balwant Singh Rajoana, in a petition to the Supreme Court from his jail cell, said his repeated pleas to the government about the fate of the mercy plea were met with silence. The mercy petition was filed in 2012.

Of the 149 divisions for which results were declared up to 9.30 p.m. on Friday, the counting day, TRS has won 55, while BJP has secured victory in 48 divisions. MIM retained the earlier number of 44 divisions. Congress could barely make its presence felt, with mere two seats.

Safety and efficacy of the COVID-19 vaccine is paramount with the regulatory pathway for the vaccine in India seeing an accelerated rolling review and interim analysis of clinical trials, said Drugs Controller General of India V.G. Somani on Friday.

Pakistan on December 4 claimed that it did not make an attempt to link the Kulbhushan Jadhav case with that of another Indian prisoner.The remarks of the Foreign Office (FO) came a day after Ministry of External Affairs (MEA) spokesperson Anurag Srivastava, at a media briefing in New Delhi, said that Pakistan is trying to link the case of Kulbhushan Jadhav with another prisoner’s case, and asserted that Pakistan has failed to respond on core issues pertaining to the case.

President-elect Joe Biden said Friday’s “grim” jobs report shows the economic recovery is stalling and warned the “dark winter” ahead would exacerbate the pain unless the U.S. Congress passes a coronavirus relief bill immediately. “The bad news of the weakening jobs picture is potentially good news for investors because it means that the stimulus bill is much more likely to take place in a fairly short time frame,” said Ryan Detrick, senior market strategist at LPL Financial in North Carolina.

A Sunil Chhetri spot-kick decided a tense Chennaiyin FC-Bengaluru FC tie and brought his team its first win of the 2020-21 ISL campaign at the GMC Stadium in Bambolim, Goa, on Friday.

Ravindra Jadeja “felt dizzy” after the completion of the Indian innings which resulted in Yuzvendra Chahal showing everyone how to be ready for opportunities that can come at any hour, India batsman Sanju Samson said on Friday. Chahal, who was not in original XI, came in as concussion substitute for Jadeja and grabbed 3 for 25 in a match-winning performance in the first T20 International against Australia.

Lt. Governor Kiran Bedi has cautioned that the COVID-19 burden would siphon off resources from other pressing sectors while appealing to the public to Source: thehindu.com Related

The Congress MLA and former Minister Tanveer Sait’s health has improved considerably and he is ready for discharge. “Barring some neurological issues, hoarse voice box and cut earlobe, he is doing perfectly fine and his health condition is good. All his health parameters are normal. He can be discharged whenever his family wants,” said Columbia […]

Terming the building collapse in Dharwad as an alarm to the government, Deputy Chief Minister G. Parameshwara has said that the State government was seriously contemplating promulgating a Public Places Safety Act to prevent any such disaster in the future. After visiting the site of mishap in Dharwad on Saturday, Dr. Parameshwara told presspersons that […]