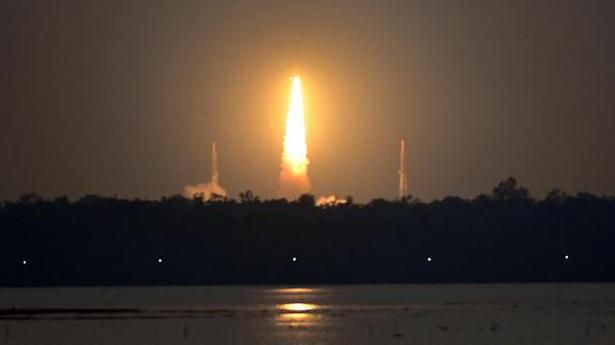 In a pre-dawn launch on May 22, RISAT-2B, the country’s newest microwave Earth observation satellite, rode to its orbit 557 km above the ground. Data that will come from the all-weather, day and night satellite are considered to be vital for the Armed Forces as also agriculture forecasters and disaster relief agencies.

Twenty-two Opposition parties met the Election Commission (EC) on Tuesday demanding that tallying of the Voter Verified Paper Audit Trail (VVPAT) slips in five polling booths in each Assembly segment with the electronic voting machines (EVMs) be done prior to the counting of votes.

In the run up to the 2019 Lok Sabha results, both Trinamool Congress (TMC) and Bharatiya Janata party (BJP) – the two key contenders in the Bengal poll – are equally tense as both have sufficient disadvantages. One key disadvantage of the BJP is its lack of a leader to match Mamata Banerjee in the State. The leaders do not deny that they “urgently need” one strong face in West Bengal to counter Ms. Banerjee.

As one eagerly awaits counting day, the pattern of electoral contests across the country, as gleaned from the Lokniti-CSDS Post Poll Survey, points to crucial trends. While support for the return of the BJP-led NDA government appears visible, important regional variations are clearly discernible.

South Korean auto major Hyundai on Tuesday forayed into high selling compact SUV segment in India with the launch of new model ‘Venue’, priced in the range of ₹6.5-11.1 lakh (ex-showroom Delhi). Venue comes with three engine options — 1 litre turbo and 1.2 litre petrol powertrains besides 1.4 litre diesel engine — and sits below the Creta in terms of price and positioning.

A federal judge has ordered U.S. President Donald Trump’s accountants, Mazars USA, to comply with a subpoena from the House of Representatives Oversight Committee and submit financial records related to Mr. Trump to the Committee. The Committee had subpoenaed financial records and communications from the accountants pertaining to Mr. Trump, his businesses and charity, from 2011 to 2018.

Four days ago when skipper Faf du Plessis called on his countrymen to play “without the fear of failure,” it was easy to see where it was coming from. The way South Africa has contrived to lose key matches at major ICC events, many of them in tragicomic circumstances, needs no reminding.

“World Cup might be a stage but that stage is to be enjoyed. The most important thing is to get out there and enjoy the World Cup. If you play to potential, the Cup might be here.”

The prospect of the National Democratic Alliance led by Prime Minister Narendra Modi returning to power has got investors in India’s equity markets all excited. Both the Nifty and the Sensex reached all-time highs on Monday as the indices appreciated 3.75% and 3.69%, respectively, the largest rise in percentage terms since September 2013.

The ACB’s seven proposals for filing FIRs against senior government officials in connection with an alleged multi-crore irrigation scam in Maharashtra are lying pending with principal secretary of the State Water Resources Department (WRD), an official has said. The Anti-Corruption Bureau (ACB) needs an approval of the Water Resources Department’s principal secretary for filing FIR […]

A powerful bomb exploded near the police station at Moreh, a border town in Manipur, and there was no casualty as the incident occurred late on Saturday. Lekhohao Waiphei, station house officer of the Moreh police station, said that the explosion took place at 10 p.m. The blast left a crater on the road. Civil […]