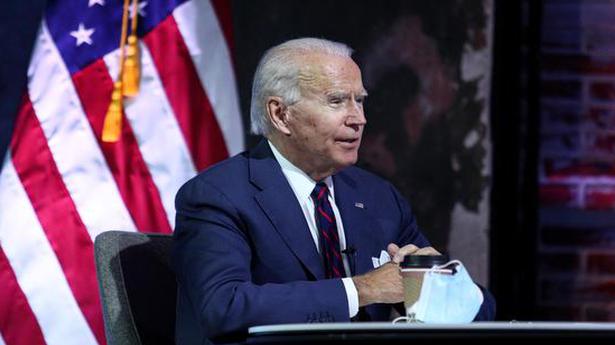 “Spoke to U.S. President-elect Joe Biden on phone to congratulate him. We reiterated our firm commitment to the Indo-U.S. strategic partnership and discussed our shared priorities and concerns, COVID-19 pandemic, climate change and cooperation in the Indo-Pacific region,” Mr. Modi wrote on Twitter.

The Supreme Court on Tuesday asked the Centre to explain its “mechanism” against fake news and bigotry on air, and to create one if it did not already exist. Inability on the government’s part may well see the job go to an “outside agency,” the court said.

The pandemic has exposed the vulnerabilities of cities that served as the world’s growth engines till now, Prime Minister Narendra Modi said on Tuesday, calling for a post-COVID-19 change in protocols, similar in scale to the post-war rebuilding efforts, to develop more sustainable and resilient cities.

The test was carried out against the high-performance jet unmanned aerial target called Banshee, which simulates an aircraft

Whatever concerns there may have been, it may have been better to address those within the tent than outside, he says

Months after the Bharatiya Janta Party (BJP) and its oldest alliance partner, the Shiromani Akali Dal (SAD) parted ways, the BJP in Punjab has decided to contest alone on all 117 Assembly seats in the State elections due early 2022.

Haryana Home Minister Anil Vij on Tuesday said that a strict law would be enacted to control ‘love jihad’ cases in the State and soon a committee would be constituted to draft the law.

The President-elect also said government contracts would not go to companies making their products abroad.

It was a gesture from an established cricketing nation to one making its first tour of that country. But for some reason, India insisted on playing on uncovered wickets, writes Suresh Menon.

The debut line-up has four pedal-assist eBicycles in the City category, designed for urban commuters and casual recreational cyclists.

The National Investigation Agency (NIA) raided houses of two person in Kasaragod on Sunday in connection with their suspected links with the Islamic State (IS) and jihadi terrorists involved in the Sri Lanka Easter Sunday bombings. Police sources said that the residences of Ahamed Arafat at Kaliyangad and Aboobacker Siddique at Nayanmarmoola in Kasaragod were […]

Hydroxychloroquine is now a schedule H1 drug, and can be sold on prescription only. According to a gazette notification issued by the Union Health Ministry, the sale of the drug from now on should be in accordance with the conditions for sale of drugs specified in Schedule H1 to the Drugs and Cosmetics Rules, 1945. […]