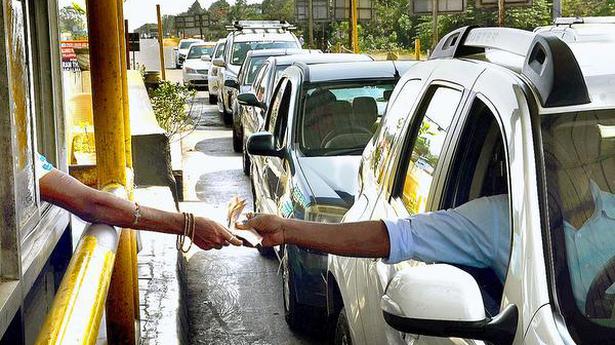 A sharp increase of toll fees on National Highways passing through the State is causing resentment among motorists.

The National Highways Authority of India (NHAI) has revised fees at most of the toll 35 plazas located on highways passing through Andhra Pradesh.

The toll fee was revised recently as per an agreement with contracting firms under the Build-Operate-Transfer (BOT) scheme. The revised structure came into effect on April 1 across the State.

With the latest hike, toll fee has gone up by 10 to 40% at several toll gates, causing motorists including owners of transport vehicles, to shell out more money on their journeys.

Most of the toll gates in the state are located on the NH-16 (Chennai-Kolkata highway) that spans a length of about a 1,000 km between Itchapuram and Nellore. Motorists driving on NH-16 between cities like Vijayawada, Rajamahendravaram, Visakhapatnam, Nellore and Ongole complain that they are being forced to pay close to half of what they spend on fuel for their entire trip.

The impact is being acutely felt by transport vehicles, and the burden being imposed on the business operators is likely to be passed on to the end users in the form of inflated ticket prices.

“The prices of monthly passes have also gone up. Increase in toll fee is a huge burden on our business which is already reeling under high fuel prices,” said K. Hemanth, a cab operator.

Light Motor Vehicles (cars, jeeps and SUVs) pay the least fees, which comes to around ₹105 for a two-way trip and ₹70 for a one-way trip at at least 12 toll plazas in the State.

While the fee at the Bolapalli toll plaza near Chilakaluripet was hiked to ₹140 for each car, other toll gates at places like Vemapadu in Visakhapatnam district, Marur and Kasepalli in Anantapur and Amakathudu in Kurnool district charge over ₹100.

“The fares are revised as per the agreement with operators made long ago. Revision will be annual and the percentage of hike is also based on the agreements,” said Project Director of Project Implementation Unit, Vijayawada, M. Vidyasagar.

The toll fees are expected to rise further once the six-lane expansion of several stretches of the NHs is completed.

After hour-long discussion with Sonia Gandhi, Sharad Pawar says he will meet her again

Nationalist Congress Party (NCP) president Sharad Pawar on Monday added to the suspense over government formation in Maharashtra by stating he would meet Congress chief Sonia Gandhi again to discuss the matter. He told this to reporters after meeting Ms. Gandhi at her residence for nearly an hour. Mr. Pawar, who maintained that the Congress-NCP […]

The Vigilance and Anti-Corruption Bureau (VACB) will verify whether any insider had let drop hints about questions likely to figure in Kerala Public Service Commission (PSC) tests to managers of private coaching centres that offer instruction to candidates to get government jobs. Investigators are verifying whether the government officials who moonlighted as teachers for the […]