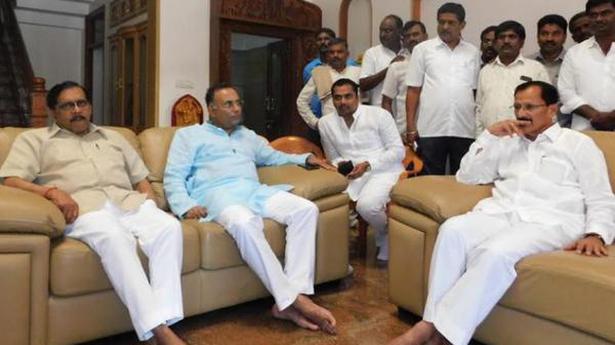 In a major relief to the former Prime Minister and Janata Dal (Secular) candidate for Tumakuru H.D. Deve Gowda, incumbent Congress MP for the constituency S.P. Muddahanume Gowda on Friday pulled out of the contest as a rebel candidate.

Mr. Deve Gowda, who is the JD(S)–Congress alliance candidate, was worried over his electoral prospects after Mr. Muddahanume Gowda filed nomination papers defying the Congress directive. Mr. Deve Gowda shifted to Tumakuru after conceding the Hassan seat to his grandson Prajwal Revanna.

Mr. Muddahanume Gowda, who was upset over denial of ticket, had threatened to remain in the fray. He, however, withdrew his papers on Friday.

K.N. Rajanna, another Congress leader and former MLA, too stepped back from the contest on the last day of withdrawal of nomination papers.

Earlier in the day, following directions from the party’s central leadership, KPCC president Dinesh Gundu Rao and Deputy Chief Minister G. Parameshwara held talks with Mr. Muddahanume Gowda and persuaded him to withdraw his nomination papers in the interest of the coalition dharma.

In the evening, after consultations with his loyalists in the district, Mr. Muddahanume Gowda gave an authorisation letter to withdraw his nomination papers to his loyalist Rayasandra Ravikumar, who came to the Deputy Commissioner’s office and withdrew the papers.

Mr. Ravikumar told reporters that Mr. Muddahanume Gowda had been hurt by the “injustice” done to him and had withdrawn from the contest with a lot of pain.

Of the 10 parliamentary constituencies in the State that the Congress represented in the 16th Lok Sabha, Tumakuru was the only one it ceded to the JD(S) as part of an agreement.

Mr. Gowda had said the JD(S) had not sought any seats that the Congress had won and that Tumakuru was given to the JD(S) because the former Chief Minister Siddaramaiah was keen on retaining Mysuru.

Former Minister and CPI(M) veteran Badal Choudhury, who has been in judicial custody in connection with the PWD scam of 2008, was injured on Sunday after he slipped and fell in the bathroom at the central prison. ‘Not serious’ He has been admitted to the trauma centre of GBP Hospital here and the doctors attending […]

A kingdom that once barred politics now prepares for polls

The tranquillity of the hamlet is disturbed by slogans blared out from loudspeakers. A few election posters at the junction invite attention for the candidates. It was at Rajapuram here the then Kozhimala Raja (King of Kozhimala) banned all political activities and removed party flags 15 years ago. The reason was the quarrel between two […]