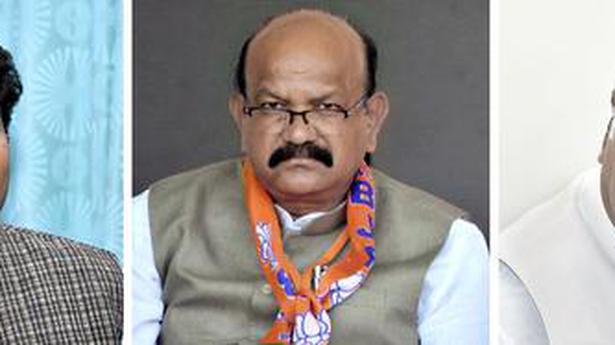 For Umesh Jadhav, the Congress MLA from Chincholi who submitted his resignation and joined the BJP at a recent public rally addressed by Prime Minister Narendra Modi in Kalaburagi, the road ahead appears not to be as easy as he had expected.

As he himself has said, Dr. Jadhav is getting prepared to contest the Lok Sabha election from Kalaburagi on BJP ticket against Congress veteran M. Mallikarjun Kharge. However, the contention of multiple aspirants for ticket in the party has made Dr. Jadhav’s way not too easy.

As per sources present in the meeting, Mr. Yeddyurappa made it clear that, out of the five constituencies reserved for the Scheduled Castes, the party would field Bhovi candidate in Kolar, SC-Right candidate in Chamarajanagar, and SC-Left candidates in Chitradurga and Vijayapura. He also expressed his desire to field Dr. Jadhav, who is from Lambani (Banjara) community, in Kalaburagi, as an inclusive measure.

Though all the aspirants, except Mr. Ashtagi, belong to Lambani community, they expressed discontentment for the “unilateral” consideration of Dr. Jadhav’s candidature from the party leadership.

Mr. Ashtagi presented his case by elucidating caste dynamics. He told the State leaders that the party’s Lambani candidate, Revu Naik Belamagi, had suffered a humiliating defeat twice against Mr. Kharge as the community was a small one. He also justified his candidature by stating that Holeya community, to which he belongs to, was the biggest community among the SCs.

Mr. Yeddyurappa only appealed to all the aspirants to abide by the decision taken by the party leadership and work in unity, said the source.

A BJP leader who was present at the meeting told The Hindu, “Dr. Jadhav might enjoy good support in his Assembly constituency, Chincholi, but it falls in Bidar Lok Sabha constituency, and his support base will not help him in Kalaburagi constituency. Secondly, Lambani community is smaller when compared with SC-Right or SC-Left.”

Sabarimala case: SC reserves order on issue of reference of question of law to larger bench

A nine-judge Constitution bench of the Supreme Court on Thursday reserved its order on the legal issue of whether the top court can refer questions of law to a larger bench while exercising its review jurisdiction. A bench headed by Chief Justice S.A. Bobde said it will pronounce the order on February 10 and will […]

Chief Minister Y.S. Jagan Mohan Reddy joined the club of Twitter users with one million followers on Sunday. His official handle (@ysjagan) garnered one million followers on the micro-blogging site popular among politicians and bureaucrats among others. Mr. Jagan’s account, which was created in January 2015, has about 9.75 lakh followers until the State’s general […]

In Rajasthan, no election can be complete without the participation of the erstwhile royal families. The Jaipur royals last entered the poll fray in 1989, though Maharaja Bhawani Singh lost to Girdhari Lal Bhargava. Now Singh’s daughter Diya Kumari is contesting from Rajsamand in Mewar, where her ancestor Man Singh led Akbar’s army against Maharana […]