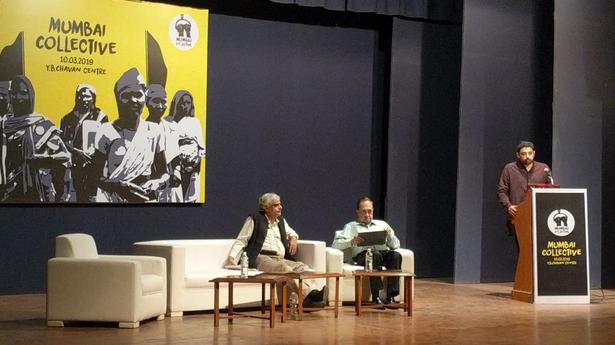 The third edition of Mumbai Collective began on Sunday and features sessions on Rafale deal, distortion of history and rise of the surveillance state.

R. Ramakumar, chief organiser, had said that they wanted a mass collective, and different kinds of protests, not just speeches, talks, but also cultural forms of resistance: songs, poetry, paintings, photographs. “We wanted our festival to be more a ‘pol’ fest than a lit fest,” he had said.

The platform took shape in 2016, its first edition a two-day event, entirely volunteer-run with crowd-sourced funds.

The Mumbai Collective 2019 is being held at at Y.B. Chavan centre in Nariman Point, Mumbai.

“In 2014, the BJP came to power after pillorying the congress, painting it as corrupt, and offering Narendra Modi and BJP as the clean alternative. Now the compliment is being returned [by the Opposition].

“Almost everyone will agree that corruption in India is pervasive, omnipresent and multifarious. It is to be encountered especially in the nexus between politics and business.

“Defence is a prime example… When we were doing the Bofors investigation, we were trying to understand if all these commissions being paid out were normal or not.

“We got an informal tip from former President R. Venkataraman, who had earlier held the portfolios of Finance and Defence Ministries. I can share this now…

“He said, ‘Don’t you know the standard rate of commission on major defence deals is 6%?’

“Indeed, we found that the average commissions paid in many such deals was 6%.

“[Thus] Corruption had become normalised. But there’s something called grand corruption that is different from the great and general corruption [where corruption is not an aberration but the system itself].

“Grand corruption affects institutions, manifests in policies…, and in the defence sector, this is the normal condition.

“Grand corruption is not just about bribes but arbitrary decision making, crony capitalism, doing favours, lobbying in the corridors of the ministry, using commission agents to try to fix the deal.

“The Indian Opposition, particularly Rahul Gandhi, has been on an offensive on the [Rafale deal], charging the NDA government and Prime Minister Narendra Modi of bypassing institutions and compromising national security in the deal that is worth 7.87 billion euros [for the aircraft and weapons packages together].

“The story is not over… Offsets need to be looked into.

“This is an area that is being investigated, especially the role of the joint venture of Anil Ambani and Dassault, what it will make and what other offset partners will do.

“The money trail of commission payments is yet to be established. But why on earth would one do away with the anti-corruption clauses?

Chief organiser R. Ramakumar, who teaches economics at the Centre for Study of Developing Economies, School of Development Studies, Tata Institute of Social Sciences, gives a welcome speech inaugurating the ‘Mumbai Collective 2019’ in Mumbai on March 10.

Prime Minister Narendra Modi on Monday conducted an aerial survey of Puri and Khurdha districts to get first hand information about the devastation caused by extremely severe cyclonic storm Fani. Expressing shock over the magnitude of damage during a review at Biju Patnaik International Airport, Mr. Modi offered all possible helps to the State to […]

The Uttar Pradesh police have killed 103 suspected criminals in alleged encounters over a period of more than two years. This was the claim made by the State police in response to taunts by Bahujan Samaj Party chief Mayawati that the police in Uttar Pradesh were keeping criminals as “State guests.” Ms. Mayawati on Friday, […]