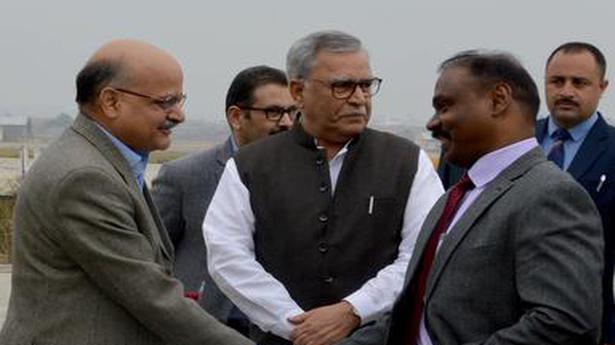 Girish Chandra Murmu was on Thursday sworn in as the first lieutenant governor of the union territory of Jammu and Kashmir following the bifurcation of the state.

The oath of office to Mr. Murmu, who will turn 60 next month, was administered by Jammu and Kashmir Chief Justice Gita Mittal at a simple function held at Raj Bhawan at the foothills of the Zaberwan range.

The warrant of appointment of Mr. Murmu, a 1985 batch IAS officer of Gujarat cadre, was read out by Chief Secretary B.V.R. Subrahmanyam.

BJP leader Jugal Kishore and Rajya Sabha MP and PDP member Nazir Laway were among the over 250 guests present at the function.

Mr. Murmu, a native of Odisha, had worked closely with Prime Minister Narendra Modi in Gujarat as his additional principal secretary during his tenure as chief minister.

Mr. Murmu is an MBA in public service and also holds a post graduate in political science.

Satya Pal Malik, who was the last governor of Jammu and Kashmir, moved to Goa for the remainder of his tenure as governor.

Mr. Malik was first appointed governor of Bihar in September 2017 and moved to Jammu and Kashmir in August last year.

The two union territories — Ladakh and Jammu and Kashmir — came into existence on Thursday after the central government abrogated the special status of the state and bifurcated it on August 5.

Senior IPS officer and former Commissioner of Kolkata Police, Rajeev Kumar, on Monday sent a letter to the Central Bureau of Investigation seeking additional time of seven days to appear before the agency. On Sunday evening, a group of CBI officers arrived at his residence in South Kolkata and served a notice on him in […]

A Bangladeshi student of Visva-Bharati who has been asked to leave India for “anti-government” activities is learnt to have approached the Foreigners’ Regional Registration Office in Kolkata with a request to reconsider its decision. The student, Afsara Anika Meem, 20, had shared pictures on Facebook of the anti-CAA protests that were held on the campus […]

A senior Uttar Pradesh police officer faced uneasy moments when a girl, during a safety awareness campaign event, asked him if she would face the same fate as the Unnao rape survivor, whose vehicle was hit by a truck in which her two aunts died. Speaking at a Balika Suraksha Jaagruktaa Abhiyaan programme at a […]