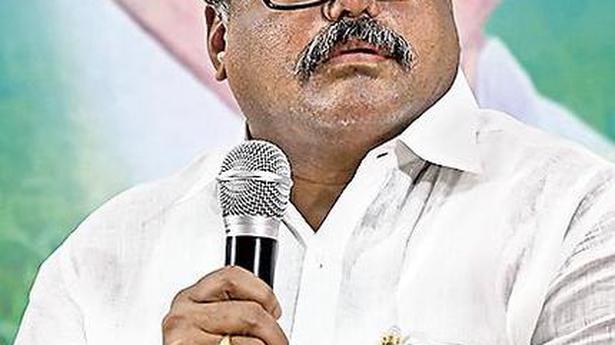 Former Minister Botcha Satyanarayana on Sunday alleged that Chief Minister N.Chandrababu Naidu had put Andhra Pradesh in a debt trap and made people’s lives miserable. He said he was voted to power in 2014 elections just because of his previous experience as a Chief Minister.

Addressing a media conference here on Sunday, he alleged that people had preferred Mr.Chandrababu Naidu to YSRCP president Y.S.Jagan Mohan Reddy in the previous election but the former had used all his experience to benefit his TDP leaders and cadre at the cost of the State’s development.

He alleged that ₹6 lakh crore funds were misused and the A.P. government was forced to pay huge interest with debts crossing ₹2 lakh crore in the last four and a half years. “Now people are repenting for making him as Chief Minister. Now, they are eager to see Mr.Jagan Mohan Reddy as the Chief Minister and ensure massive victory for YSRCP in all 13 districts, including Vizianagaram,” he said.

Mr.Satyanarayana, who is contesting from Cheepurupalli on YSRCP ticket, hoped that the YSRCP’s vote bank would go up 60% this time. “Last time, the vote margin was very slight between YSRCP and TDP. The TDP could get only 6.01 lakh votes extra compared to YSRCP. Now, our party is expected to get comfortable majorities in all the seats,” he added.

Mr.Satyanarayana alleged that the TDP was trying to show Mr.Jagan in poor light by citing ‘false’ cases. “Chief Minister N.Chandrababu Naidu should seek votes on his performance. But he is trying to mislead people by linking YSRCP with TRS and BJP. In fact, his party had an alliance with BJP at the Centre. He himself provoked TRS on various issues. Naturally, TRS reacts sharply. It does not mean that YSRCP has an understanding with TRS,” he said.

He hoped that the party would win a majority of the 34 Assembly segments in North Andhra and the region would play a key role in ensuring formation of a YSRCP government in Andhra Pradesh. “All our MP candidates of North Andhra region are also expected to win the election with a massive majority. All the elected MPs did nothing to the region in the last five years,” he alleged.

A 72-year-old man allegedly murdered his 62-year-old wife and ended his life in Perungalathur on Sunday. Police said that Jagannathan lived with his w Source: thehindu.com Related

The managements of Telangana power utilities have attributed motives to the attitude of their Andhra Pradesh counterparts alleging that the latter are running a misinformation campaign over the issue of dues — amount payable on power purchases — besides moving the National Company Law Tribunal (NCLT) in spite of offers made by them for settlement. […]

On a blistering April afternoon in Tiara village in Ghazipur constituency, Union Minister for Telecom Manoj Sinha is laying down his campaign pitch to an attentive audience. He lists the many development projects, as well as social welfare schemes initiated by the Modi government before going on to the marquee topic of the Balakot air […]