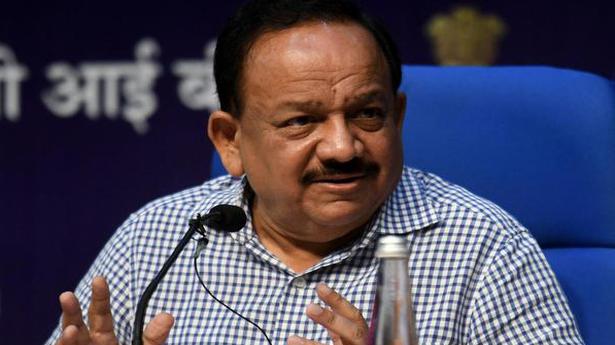 The names of over 100 hospitals found involved in malpractices have been put up on the official website of the Ayushman Bharat health insurance scheme as part of the government’s “name and shame” initiative to create deterrence among healthcare establishments, Union Health Minister Harsh Vardhan said on Monday. Addressing the ‘Arogya Manthan’ organised on the first anniversary of Ayushman Bharat-Pradhan Mantri Jan Arogya Yojna (AB-PMJAY), Mr. Vardhan said the government is also planning to implement a “name and fame” initiative to felicitate hospitals performing well under the scheme.

“As part of the government’s zero-tolerance towards corruption, names of 111 hospitals which have been de-empanelled after they were found involved in some kind of fraudulent activity or malpractices have been put up on the official website of the AB-PMJAY as a part of our ‘name and shame’ initiative.

“We are now also planning to implement a ‘name and fame’ initiative to felicitate those hospitals which are performing well under the scheme so that their best practices can be emulated by others,” Mr. Vardhan said.

The ‘Arogya Manthan’ was organised by the the National Health Authority (NHA), the apex body implementing the scheme.

The Minister said a strong fraud prevention, detection and control system is proving to be critical for PMJAY to ensure that frauds are prevented and even if they are attempted, they are quickly detected and strong action is taken.

Nearly 1,200 cases of fraud have been confirmed and action has been taken against 338 hospitals in the AB-PMJAY, Vardhan had said, adding that FIRs have been lodged against six and penalties amounting to over ₹1.5 crore have been levied.

He also congratulated the people who played major roles in conceptualising and implementing the scheme according to Prime Minister’s vision with the use of technology and science to ensure that its benefits reach people living in the remote corners of the country.

“These soldiers and innovative minds will discuss the achievements and the shortcomings of the scheme which was launched last year. They will also deliberate on ways to make it state-of-the art programme and strong IT enabled,” he said.

Maharashtra Uddhav Thackeray on alliance with BJP for Assembly elections Shiv Sena chief Uddhav Thackeray on Tuesday said despite his party being in Maharashtra government for last five years without much power, he never betrayed or conspired to pull it down. He said in an alliance, both parties need to exercise caution and if the […]

Police Commissioner Bhaskar Rao went into home quarantine on Friday after his driver tested positive for COVID-19. “I have home quarantined myself for Source: thehindu.com Related