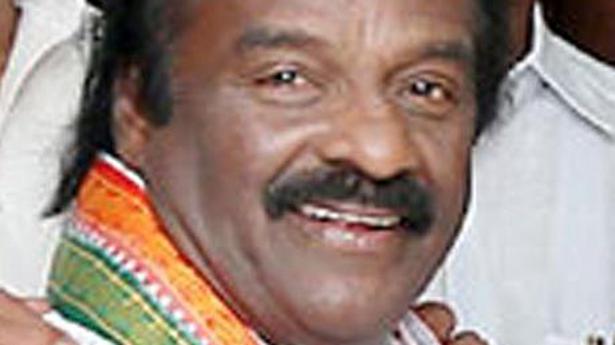 Following this Nanguneri Assembly constituency is set to face a bypoll, as the term of the 15th State Legislative Assembly is scheduled to end only in 2021.

Since Nanguneri Assembly was constituted in May 2016, the State has faced bypolls in 24 constituencies so far owing to disqualification of 19 legislators (18 under anti-defection law and ex-minister Balakrishna Reddy due to conviction in a criminal case) and vacancies caused by deaths of five sitting legislators including former Chief Ministers Jayalalithaa and M. Karunanidhi.

When asked by journalists if the Congress, which is part of the DMK-led alliance, would contest in Nanguneri, Mr. Vasanthakumar said that the All India Congress Committee and Tamil Nadu Congress Committee would decide on the issue.

“Since it is a Congress constituency, where I won twice, we are for Congress contesting from there,” Mr. Vasanthakumar, also one of the five TNCC working presidents, said.

Asked if the DMK has expressed its intention to contest in Nanguneri, he said: “They have not approached us on this issue as yet.”

373 in fray in for 58 divisions in Karimnagar

A long road to last rites