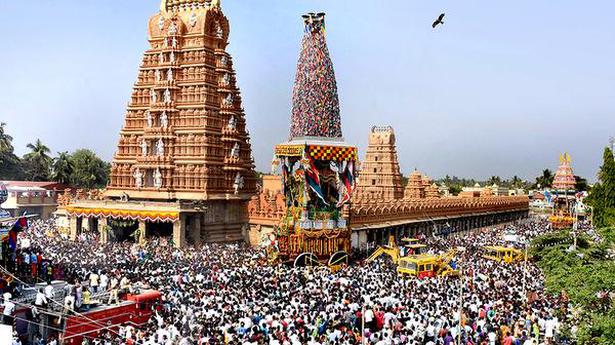 Thousands of people congregated in the temple town of Nanjangud to witness and participate in Pancha Mahatathothsava on Tuesday.

Also known as Dodda Jathre, the rush to witness the biggest annual religious event of the town, located about 26 km from Mysuru, began from Monday.

The preliminary rituals including rites to the main deity of Srikanteshwara temple were conducted from dawn. As a battery of priests chanted hymns, devotees jostled outside to occupy vantage points along the car street to catch a glimpse of the main event that was to follow. The five chariots or rathas were readied the previous night. On completion of the rituals, the first of the chariots carrying the idol of Lord Ganapathy began its journey.

This was to be have been followed by other chariots including the Gauthama Ratha – the tallest of the five at nearly 95 feet in height that carries the idol of Lord Srikanteshwara. But the rope secured to the chariot repeatedly snapped delaying the proceedings. Though the authorities replaced the ropes and secured the new ones to the chariot, they snapped too, causing more delay.

After a few hours, the chariot was heaved and moved with the help of heavy earth moving equipment while devotees pulled it with the rope tied to it. The devotees blamed the temple management for its failure to ensure that the rites were conducted smoothly.

The other chariots which followed the Gauthama Ratha were carrying the idols of Goddess Parvathi, Subramanya and Chandikeshwara and they reached the starting point on completing the circumambulation of the main temple.

The district administration had strengthened security. There was a strong posse of police deployed along car street to control the crowd. The KSRTC had introduced special services to Nanjangud from different parts of the district. Senior officials of the Revenue Department were present.

How to vote in VVPAT Electronic Voting Machine?

For the first time, all booths are equipped with VVPAT machines along with the electronic voting machines to ensure the voters that their votes go to their preferred candidate. Here are the key things to know before casting your vote: Mobile phones are not allowed in polling booths. The booth slip is not mandatory. The […]

The bandh called by the TSRTC Joint Action Committee was partial in former united Adilabad district on Saturday as markets opened in the afternoon. The impact of the bandh on the TSRTC operations itself was total as only a few buses on hire could be operated under heavy police escort. No temporary driver or conductor, […]

One more COVID-19 death in Punjab