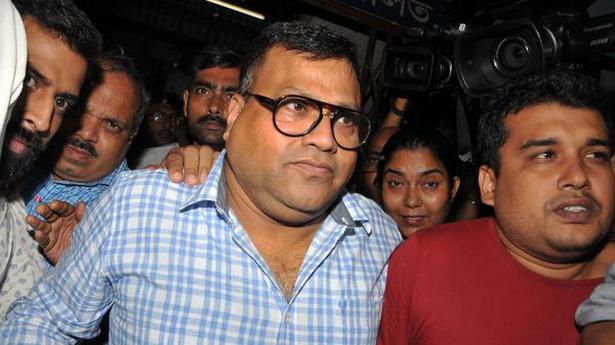 A special CBI court on Wednesday rejected the bail plea of suspended IPS officer SMH Mirza, who was arrested by the central agency for corruption in connection with the Narada tapes case, extending his judicial remand till November 26.

Mr. Mirza’s counsel pleaded before the Kolkata court that his client is in no manner connected with the scandal but has been in custody for 49 days.

He prayed to the court to grant Mr. Mirza bail as there’s been no progress in the case since his arrest. CBI lawyers pleaded that Mr. Mirza’s appeal be rejected as his custodial remand was needed further for interrogation.

Mr. Mirza was the Burdwan Superintendent of Police when he was allegedly caught in a sting operation carried out by Mathew Samuel, the editor of Narada news portal, in 2014.

He was arrested on September 26 this year and produced before the court, which had initially remanded him to CBI custody for five days.

The court had remanded Mr. Mirza to judicial custody for 14 days on September 30 and had extended it twice.

The Narada tapes surfaced ahead of the 2016 West Bengal Assembly polls.

In the tapes, persons resembling senior Trinamool Congress leaders and Mr. Mirza were seen accepting money from representatives of a fictitious company in return for favours.

The Calcutta High Court had ordered a CBI probe into the Narada sting operation case on a public interest litigation, which sought an impartial investigation into the footage.

The Bombay High Court at Goa on April 22 issued notices to the office of the Goa Speaker, among others, following a petition seeking quashing of acting Speaker Michael Lobo’s order of March 27, approving a merger of a breakaway group of the Maharashtrawadi Gomantak Party(MGP) into the BJP. MGP is an alliance partner of […]

Unavailability of private doctors is adding to their woes Source: thehindu.com Related